Hit enter to search or ESC to close
Positive People 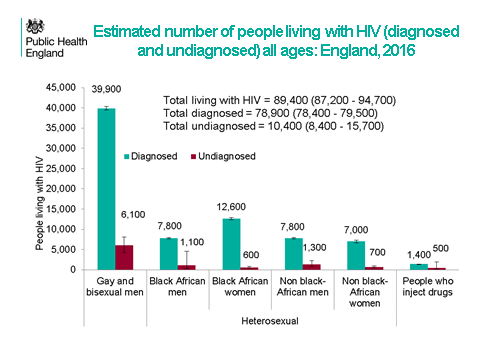 New data released from Public Health England marks a turning point in the UK’s fight against HIV after large reductions in new HIV cases in 2016.

It was noted that for the first time, the overall mortality rate of people with diagnosed HIV aged 15-59 years, who were diagnosed promptly, was comparable to that of the general population of the same age-group.

It is also the first time that the  UNAIDS 90-90-90 targets were achieved in in London, with 90% of Londoners living with HIV infection diagnosed, 97% of those people diagnosed receiving treatment and 97% of people receiving treatment being virally suppressed to the point where they cannot transmit the virus to sexual partners. England, as a whole, are still a little way off the UNAIDS 90-90-90 figures – with diagnosis/treatment/viral suppression currently sitting a 88%, 96% and 97%.

The report once again highlighted that too many people are still being diagnosed late, after the point at which they should have already started life saving treatment, especially among heterosexual men and women. People diagnosed late have a higher risk of death within the first year of diagnosis and a higher chance of serious ill-health in succeeding years.  They have also spent a longer period unaware of their HIV positive status with possible risks of transmission to sexual partners.

“This year, there are 3  firsts in the 30 year history of the UK HIV epidemic. In London, all the global UNAIDS 90:90:90 targets have been met with 90% of people living with HIV infection diagnosed, 97% of people diagnosed receiving treatment and 97% of those receiving treatment virally suppressed.
HIV transmission among gay and bisexual men has fallen for the first time and the death rate among people with HIV who are diagnosed promptly and on treatment is now comparable to the rest of the population.
We celebrate these extraordinary achievements which are the result of a comprehensive response involving many key players and organisations . By continuing to invest in effective preventative measures including condom use, expanded HIV testing, prompt treatment and the use of PrEP,  HIV transmission, AIDS and HIV-related deaths could become a reality in the UK.”

“This data is very welcome and shows what can be achieved if we increase testing and get people on treatment early.  But we cannot be complacent.
The equivalent figures for the whole of England are 88%, 96% and 97% respectively. However the number and proportion of diagnoses made at a late stage of HIV infection remain high, particularly among heterosexual men and women.
The  London figures are in part thanks to a big increase in repeat HIV testing by several large Sexual Health Clinics. The picture in general practice and many hospitals around the country is very different, and routine HIV testing is still not being offered in areas of high prevalence.
We need to ensure Hospitals are following the NICE Quality Standards on HIV Testing so that we can replicate these figures all over the country. We’d also recommend that clinics and community organisations providing HIV testing make use of our Clinical Indicator leaflets to help identify those who would benefit from HIV testing”