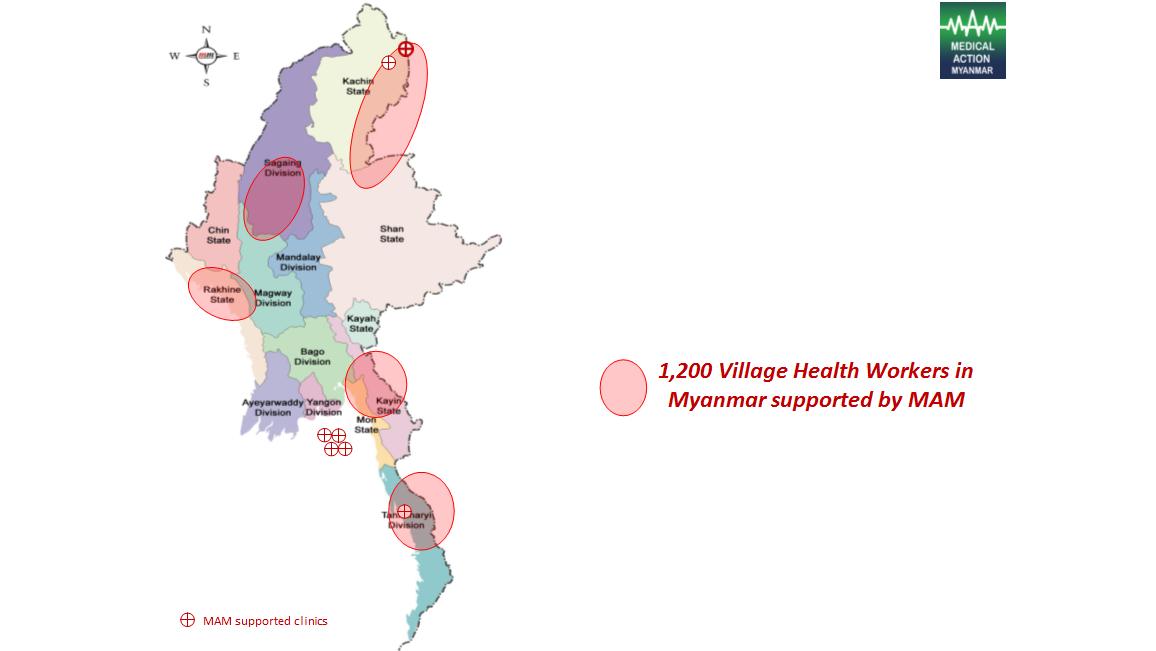 Time for a bit of history about MAM. Started by a husband-wife doctoring team (Frank Smithuis formerly of MSF and Ni Ni Tun) (right) nearly a decade ago when they took over a closing MSF facility in a desperately poor part of Yangon, it has grown despite numerous obstacles into a slick organisation fulfilling its foundation aim of providing health care to the needy of Myanmar. This has required a zealous and indefatigable pursuit of funds to keep this par-excellence example of what can be achieved with untiring commitment, professionalism, passion, and a belief for a cause credible of a life’s work, which it undoubtedly is, alive and growing. Actions speak louder than words: 11 clinics, 1200 volunteer community workers, and an infrastructure dealing with the logistics of it all which would make Jeremy Hunt ashamed with what can be achieved when there is belief and high staff morale and where the NHS founding principle of treating everyone for free at the point of care is part of the organisation’s genetic code. 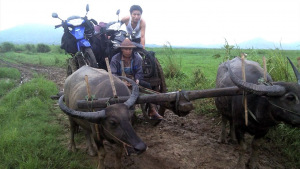 It now reaches out to nearly half a million Burmese which is around 0.1% of the population providing health care and all achieved in less than a decade. Imagine, if you can, our wonderful department of health rising to that task, where accessibility is nigh on impossible and communities are less than a few hundred and who have never left their villages with no understanding of health, sanitation, and anything but traditional medicine (left)? But the model of ‘bare-foot-doctors’, where chosen village leaders are trained in recognising and managing basic medical conditions such as malaria and TB and then delivering that care to their community is a path well-trod all over the globe and is the bedrock of improving health in remote areas. The catalyst for MAM to develop such a network (below) was the need to tackle the pressing threat of resistant malaria which is being achieved, but a basic health care package was then added and hundreds of thousands of health care consultations have now been carried out by these community leaders which is great and again, a testimony to MAM. Of course, the whole organisation consumes money as saving lives is not free. And the maths is straightforward even for a ‘B’ grade A-level maths student like myself: the more that is given, the more lives are saved. 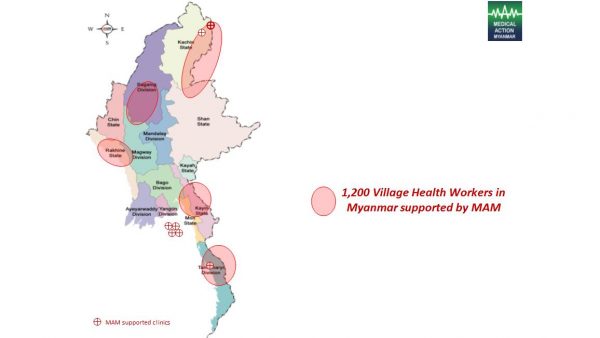 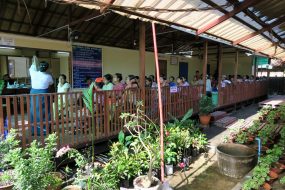 So, moving onto the donors I want to focus on the Sanni Foundation who together with another major sponsor and MAM rebuilt and continue to fund the operation of the main clinic in Yangon (right). As well as building the orphanage they have been one of the many donors who have kept this organisation afloat, as without donations it will surely sink! And they are just one of many. Now I don’t particularly have it in for global health organisations but an article confirming what I always believed (enormous wastage of money with large health organisations) that WHO spends more money on flying its staff and ‘consultants’ to far-off places business class and housing them in 5-star hotels than it does on malaria, TB, and HIV projects combined did chaff to say the least – apologies if I’ve mentioned this before but it is worthy of a re-run. A whopping $200 million give or take a lottery win every year is some bill for such a respected institution. A little discomfort and less claret for the airborne WHO staff could fund countless NGO operations around the world and, as I said earlier, ‘money saves lives’ so it’s easy maths. But that’s not to say that we aren’t all guilty of that daily but on a smaller scale and I write this as I drink an expensive macchiato when I could go without. But still $200,000,000 is a lot of zero’s.

You might be under the impression that I live in an intellectual vacuum – possibly a good thing as senescence descends – but in fact I’m surrounded by super-clever motivated persons who want nothing more than to do some top quality clinical and epidemiological research on the enormous cohort of HIV patients that have come through the clinics (over 10,000) and where good data has been collected and this has now started in earnest with fantastic preliminary results. We are also starting a project on primary resistance rates in HIV and assessing how resistance testing can contribute to real-time patient management and many other projects including on hepatitis C co-infection and nutrition are underway. But I always tend to gravitate to my Lord Kitchener impersonation of ‘This country needs you’ to persuade anyone reading this to dip their toes in the water and come out here to work. And with that in mind, one bit of advice that I was given before I went out to Africa in 1979 (dearie me such a long time ago!) was to find a project, develop it, and publish the results. It confirms that you never stepped off the conveyor belt of progressing your career despite being abroad. So, a recent friend of the family who came out for 2 weeks in a year out prior to starting medical school has not only learnt how to wear a longyi but also done an excellent research project which hopefully will get published in due course, something that will always be a credit to him and stand him in good stead in the future.

To end with a few new rules to be aware of. Rule one, don’t fly a drone over the government building in Nay Pyi Taw; it may end you up in prison under the ‘Aircraft Act’. Rule two if you’re a company, don’t do business or have links with the military in Myanmar otherwise you will be named and shamed by ‘The Burma Campaign UK’ organisation in their first list since 2002, due out in January 2018. Rule three, if you are lucky enough to get an invite to a wedding it’s probably a posh one and there’ll be a list of welcome gifts at the John Lewis-equivalent store – try to get in before the rice-cooker or electric fan are crossed off because as is the case everywhere, the bigger the better (cheque that is). Rule four, if you come to live here, don’t buy a right-hand drive car otherwise it’s a risky business and you’ll need a family member, friend, or hitch hiker in the passenger seat to help you navigate the right-hand drive roads. Last rule, obvious really, which is don’t end up in court. There are an enormous number of issues, ranging from poorly qualified judges and lawyers to corruption and interference by the executive. Best thing is to avoid at all costs.

You’ll be pleased to hear that the next time you read one of these will be after Xmas as I trundle off on a long journey next week via Bangkok back home to see family and friends and experience a bit of wet Manchester weather!