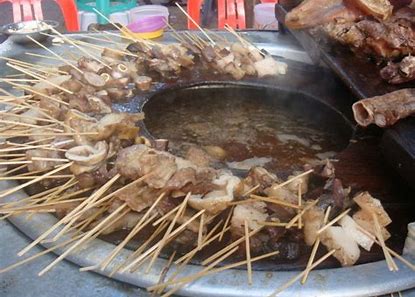 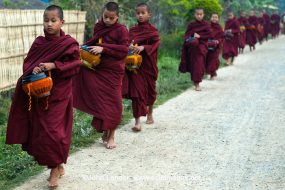 This is the cheeky sequel of a two-episode series, the first being week 30, which in turn was a sly follow-on to week 29 – so for anyone with sufficient stamina and a home coffee-machine to stave off stupor, they must be read in order! 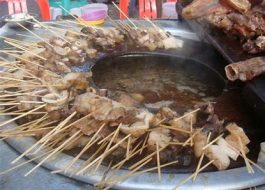 So after knocking off five of my dirty dozen Yangon street-life list, seven remain and since I’m spending so long describing them, I’ll be brief! Pork-stick is effectively any bit of the pig from brain to placenta, but top-of-the-Burmese pig-pops are tongue and bowel (left). Skewered on a stick and deep-fry cooked in front of you, it may seem a pleasant midnight snack: look bemused at the array of meaty morsels and the stall proprietor will choose a tasty selection for the most discerning of palates and bowels. A common feature of the night life but, like the durian fruit, sticked offal is an acquired taste.

Staying on food, Shan noodles is one of the signature dishes of Myanmar which is regularly and happily consumed by all, often to be followed by a beer or two at one of the many beer-houses (right): indeed, no week goes by without both and you don’t need your Burmese dictionary to order – which is handy for me as I know less Burmese now than I did after the first month – as all the waiters know exactly what you want even if requested in pucker English. Other never-to-be forgotten memories which no self- 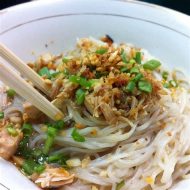 respecting street can be without, are the bike side-cars and the dogs (below, 1 & 2). How the gearless former ever start moving is a minor miracle, as they are often powered by pensioners and carry Burmese’s very own big Bertha’s, but move they do, fearlessly negotiating traffic from hell. As for Yangon’s very own answer to Crufts, the street pedigree pooches are around your feet all the time, yearning of course for a little discarded pig-stick. The final two are the weather, which has ranged from an impressive and unbearable ground temperature of 46C this week to a day where stepping outside without an umbrella is like jumping into a swimming pool fully clothed (below, 3&4); and the monks in their maroon robes silently walking the streets with their alms bowls (top). All boys enter monasteries as novice monks sometime between 7 and 13 and can stay from a few days to a few lives: every morning you witness these shaven-headed boys and senior citizens walk barefoot and in silent single-file down the streets with their alms bowls, while the women stand waiting to give them food.

Next week I’ll get back to a bit of medicine and life in the now wet clinics.