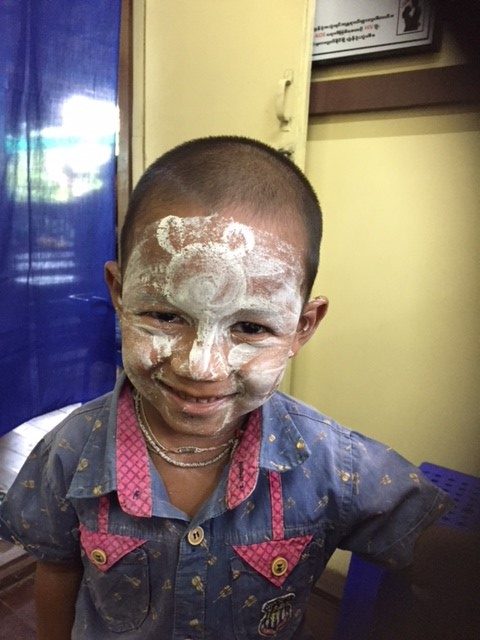 First up in the inaugural picture blog is thanaka. This an ochre coloured bark-paste which adorns so many of the Burmese faces and is always applied to the cheeks and quite often to the rest of the face, sometimes patterned (occasionally to a level any modern art critic would admire). You see it everywhere – on children, young men, and women of all ages – and after a while fail to notice it (right). On delving into its qualities, it hits the spot outstripping any other western department store’s top-of-the-range high-market juju face potions which promise dermal rejuvenation and a return to a wrinkle-free skin, with the promise of renewed admiring glances of the, hopefully now younger, opposite gender. Thanaka ticks many more boxes in the Utopia of cosmetics list: sunblock, skin-lightener, acne-cleanser, coolant, insect-repellent, and of course beautifying agent. And, as if proof was needed, they do all seem to have line-free ever-youthful skin. However, just like the Brits with their beauty products it’s embedded into national culture, which brings me onto the next item on the list, betel chewing.

The legacy of a good leaf chew stains everything – mouth and teeth (above, left); pavements, roads and lampposts (above, right); clothing, and even a pair of my shoes! Chewing the betel leaf (Kun-ya) is virtually a citizenship pre-requisite, a hallmark of the Burmese which is the equivalent of gum-chewing in the USA.  Supplies are sold on every street corner and at most traffic-lights where vendors weave between the horn-hooting and erratically driven taxis restocking supplies. Mouth-ruminating drivers discharge their oral red-stained debris everywhere but most frequently through the open car door or window, often with great velocity, and sometimes without first checking who is in spitting distance. Unfortunately, like raspberry juice, it’s impossible to remove even with the strongest of those biological agents forever being advertised. There are two morals to this. The first is to stand as far back as you can from the road and the second, which is imperative for the cyclist to know, is to watch out for the unexpected opening of the driver’s door which may not only abruptly de-saddle you but also put you in the direct line of the betel-spittle. 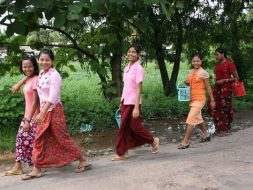 Third on the list is the longyi (left). The Burmese are never drab and grey (like their UK counterparts can be) but bursting with colour. Coming in all shapes and sizes, colours and patterns (you can even find several tartans), whether for daily or special occasion use, they adorn the women and show off their size 6 petite waists to best advantage. For men, these quick assembly equivalent of Velcro-fastened trousers can be hitched up for the monsoon rains, a game of football, or after too many beers (below, right); alternatively, they can quickly be let down for work or meeting the in-laws. I can’t say that this is my go-to daily wear as although putting it on isn’t too tricky in the privacy of your own home, keeping it on is a tad harder. 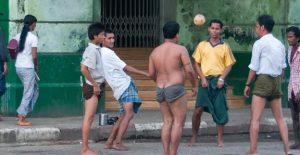 eat (below). Few of the volunteers do this however because of the easy availability of cheaper grub already cooked in one of the local restaurants, but the greengrocer, who has an amazing array of fruit on show does get a regular visit from me. Durian is a favourite of the locals and certainly lives up to its odorous reputation. The stench has been variably described but all agree how unpleasant and lingering it is. Interestingly it breaks down alcohol and is therefore a reputedly a good cure for hangovers. Never to be mistaken for a perfume, try it if you haven’t before: although some describe this as a delicacy not to be missed, my palate is obviously decidedly common, and I will happily miss it for the rest of my life, as will my flatmate, and indeed the flat. 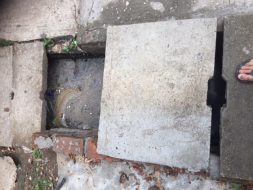 Next up are the pavements which usually consist of big concrete slabs placed over a deep water and debris-filled trench. Some of these paving stones are secure, but many are not, and some have even disappeared completely (left). This is compounded by what appears to be a combined effect of war-shelling and a Richter 7 earthquake damage to the remaining slabs (right). So, this is no ordinary evening romantic stroll in the balmy summer air but requires full-on search-light focused concentration when navigating through the dark, especially if a litre of beer to the good, for it’s not just your favoured flip-flops you may lose when you fall into the rapidly flowing household Yangonese effluent lying below.

So here are the first set of picked pics: next week the remaining pics-of-the week go up! And if you find this interruption to the more informative blogs trifle irritating, I promise to get back to normal blogging by week 32!!