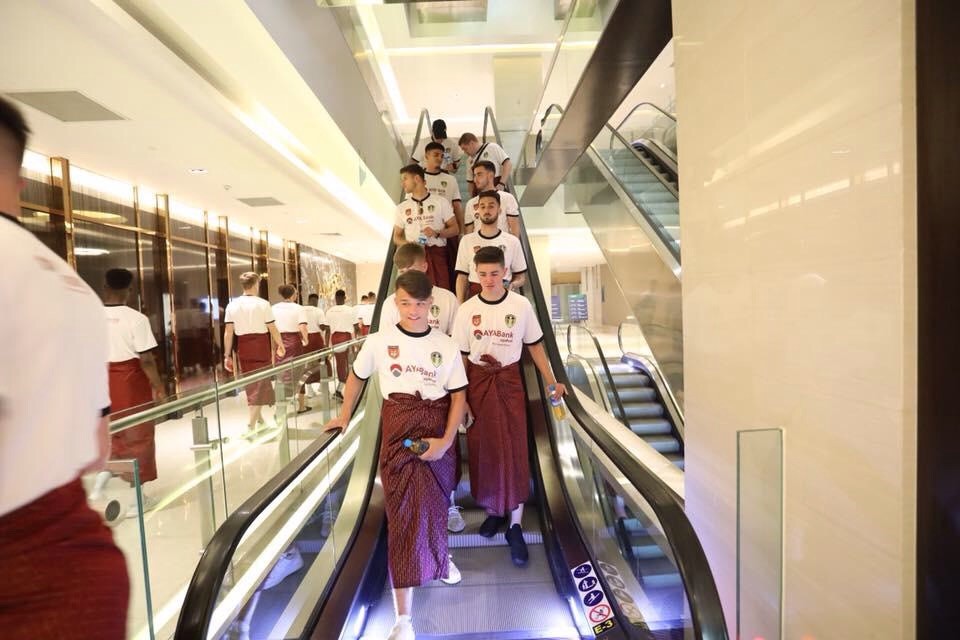 Pondering as I tend to when faced with a blank page and looking for the inspirational heavenly thunderbolt to strike and get me past ‘Go’ (not helped by a yet-to-be caffeinated brain), I had one of those visionary moments. Indeed, I’m not certain why I didn’t think of it before especially as I’m a fair number of blogs behind schedule. Quite simply, I thought this week we could have an additional pictorial blog (in fact two!) – a sort of blog happy-hour with three for the price of one! There are several advantages for me. First, it’s one heck of a lot easier and doesn’t require me to think too hard, which as alluded to is often a significant morning hurdle on my dedicated Saturday blog-time; second, everyone likes and remembers pictures, especially when the alternative is just highly personalised chit-chat which is no doubt thought by some to be a little too much waffle and not enough substance (or just plain irksome and this starts to chaff after a while). Third, it allows the non-medics a week off the doctoring stuff and spares them that quasi-missionary call-for-volunteers plea. Also, I can quite covertly slip these in as two of my catch-up blogs with two more weeks clocked up and so I’m two more blog numbers done and, lastly, it allows me to show you some of the day-to-day moments in Yangon that have stuck with me and define my personal memories of my time here so far. So, this is not a trip-advisor ‘top-ten sites you must see while in Myanmar’ or indeed Yangon (maybe that’s another useful ‘filler-blog’ for a future occasion) but my snapshot of life in my street and what’s struck a chord in the last 15 months. Nevertheless, already I can see that as soon as I start writing this prologue to the picture-only blogs which you’re all now expectantly anticipating, it’s starting to fade as I’m wittering on too much. So, let’s at least start the process! 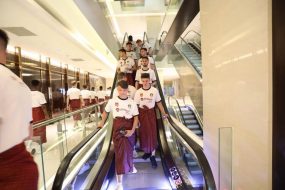 So, week 30 and 31 have a dirty dozen of my best – sorry have added a couple: thanaka, longyis, betel staining, pavements, the weather, pork-stick, beer-houses, dogs, street markets, Shan noodles, pedal sidecars, and, last-but-not-least, the early-morning orderly line of no-age-limit monks. And you’ll not be spared some Yangonese-style preamble as an accompaniment to each mobile snap. Maybe this is super-sneaky of me, but I feel I can make a legit case for this blog-writer’s cop-out as any potential volunteer will live in this same street, see these same sights, and share many of these experiences, all within a few hundred yards from their flat. But back to here and now. The main Yangon thriller of the week was a much-anticipated visit of the Leeds United football team whose Myanmar footie kick-about consisted of a match against the ‘All Stars’ followed a couple of days later with another against the ‘National team’: given the depth of footballing talent in Myanmar, I think it’s likely to be the same side. Whether they should or should not have come was argued hotly in the local news and probably further afield but come they did and immediately slipped out of their Armani suits, designer shoes, and Rolex watches into 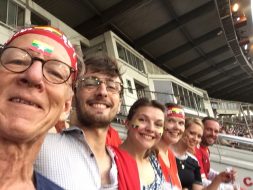 PC-appropriate longyis and trainers – flip-flops might have not been covered by their foot-insurance policy I suspect (left). Not my beloved Man U I realise, but still the prospect of a real-time quality footie-match was too good to miss. So, off the volunteers duly went en-masse appropriately bedecked with the national colours to the stadium to watch the All-Stars take on the end-of-season might of the mid-table English Championship league side, hoping for a good and close match but realistically expecting a thrashing (right). This was only to be thwarted by the ticket maestro who, because no doubt of our white skins, presumed we were followers of the all-white kitted away team and so seated us with the rather rowdy, pre-loaded, impressively statured through intense fast-food and beer-training no doubt back home, but most surprisingly, numerous Leeds United supporters. Nevertheless, salvation was at hand because the All-Stars amazingly won although this did nothing to quell the high-spirited followers of Myanmar’s very own Leeds United’s ‘Barmy army’. 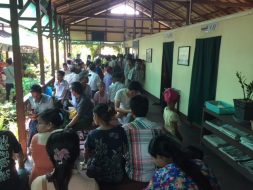 But for those wanting a summary snap-shot of my working-week, these five days have reinforced two patently obvious things: the enormous amount of pathology that walks in the clinic door and the need for your very own hospital switchboard list of ex-colleagues who you can call on back-home when you’re stuck or desperate – one of the advantages of being my age as you’ve accumulated more in your mobile contacts list. Of course, don’t expect everything walking in to be knocking on the proverbial reincarnation door as there is a waiting room full of the everyday problems that make up the bread-and-butter of a typical UK-GP’s surgery list (left). Hence, rashes from scabies to chicken-pox, diabetics and hypertensives (often poorly controlled because they cannot afford some of the drugs), snuffly-nosed tots, and the aches and pains of the worried-well. The differences are immediately noticeable however: half-a dozen HIV patients, the phenomenal number of TB cases (at least one new case a clinic: Tuesday’s is shown – right), the late pathology because of delay in seeking medical help, the more than average number of contenders for serious sickie of the week, and the absolute faith and respect that patients have for the doctors, alas an all too rare event back home now. As examples, two young men came into clinic this Tuesday, one seeking help for the first time with a three-year history of a slowly growing 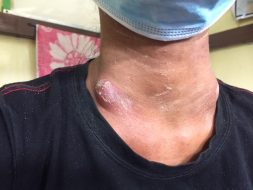 swelling on the side of his leg (below) and another 6 months after last being seen with underlying HIV and an expanding mass behind his left eye (below) which was slowly making him blind. For both these, I called up medical friends back home and have an answer for the former and the promise of a differential for the latter in a few days: a rapid-response expert team just not available in Myanmar. Both need surgery. Government hospitals are theoretically free but, as I’ve said before, the family must usually pay for the instruments, anything but the basic drugs, and of course provide the day-to-day auxiliary nursing care – no doubt a money-saving strategy being considered in the UK. So, it’s a hopeless, frustrating, and desperately sad situation. Nevertheless, this week’s acute sickie was a new diagnosis of HIV with what I believe was a liver abscess. He needed resuscitation, empirical intravenous antibiotic (we only have one), and referral. Alas, not much in the way of helpful investigations to note down in the referral letter such as a scan or chest X-Ray, both of which will take two days and relieve the family of some hard-won dosh which needs to be saved up for hospital procedures, and only the basic bloods are available. But I know anyone contemplating time out here will be predicting and preparing themselves for exactly this sort of situation. Not, I fear will they be prepared for the conditions that we have had this last week when temperature’s have been unbearable in clinic with a ‘feels-like’ temp of 46C (below). 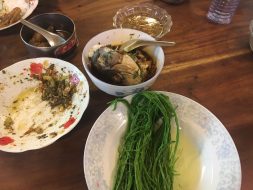 On a lighter note, lunch at the clinic was chicken feet and fish-head yesterday, neither of which quickened my pulse (right) even with lashings of rice and spicy extras: I’ve had my fill of intestinal bugs and since home-time is not far away I’m planning to step onto that plane without wishing I’d chosen a seat closer to the gantry, and off it fully hydrated. Instead, I’ll stay with my bowel-trusted local Burmese, Thai, and Indian restaurants, where food is dirt-cheap, wonderful, and served with an ice-cold Myanmar beer. Wonderful and will be sorely missed! I’ll now get on to the picture week!