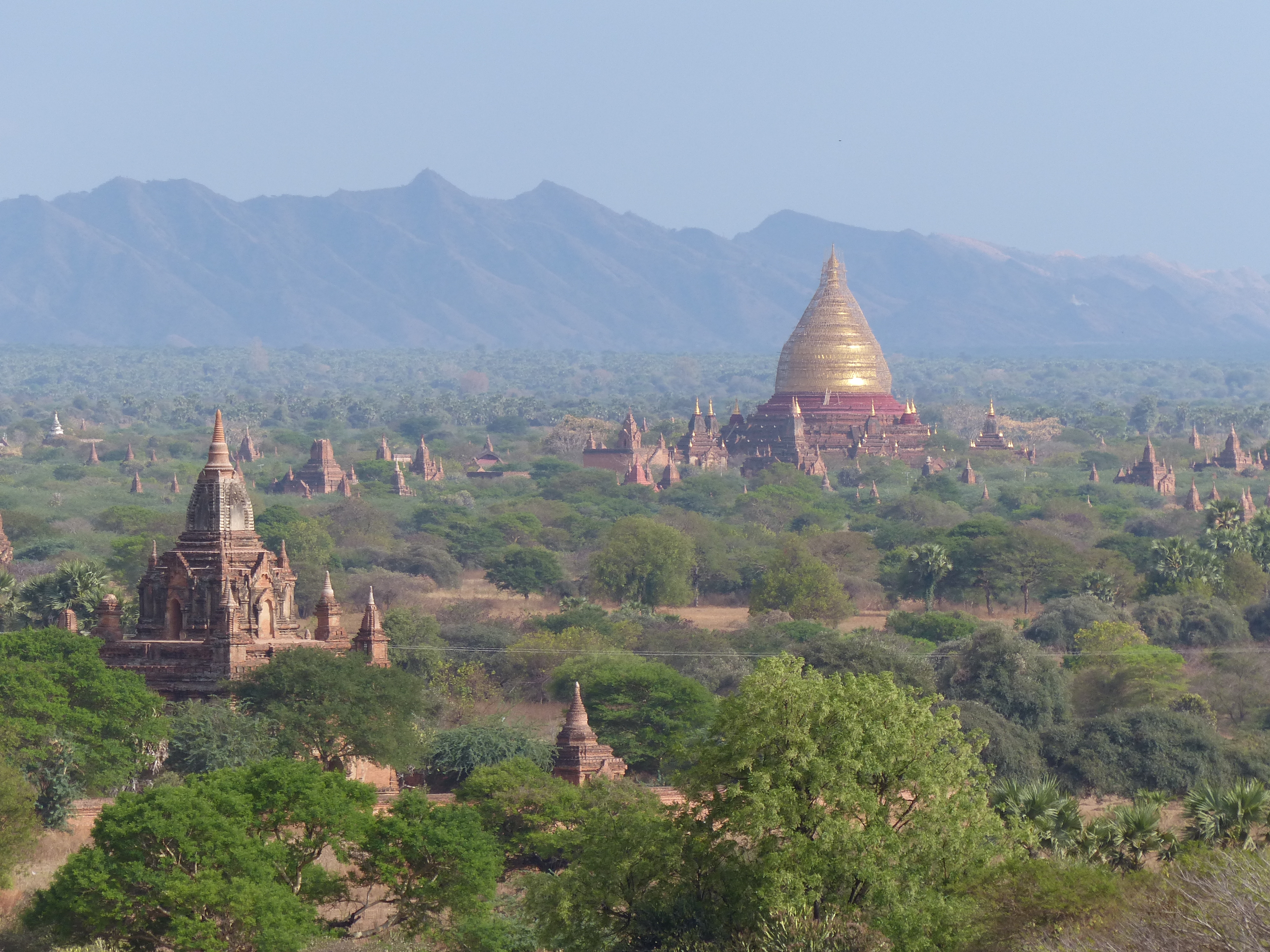 Blogs can easily become a process of self-indulgent navel-gazing, embellished without contradiction and, like the Christmas letter from the hedge-fund managing cousin with her Cambridge-destined children, full of successes achieved against tremendous odds. A sort of blog-heroine that only the writer ever reads and where most others get numbed by the serial drivel which alas it often is! Now, I try and persuade myself that this blog of mine is serving a purpose, albeit a somewhat rarefied one and for an extremely select audience. I’m proud to say that outside of those occasional bored web surfers who just happen upon it, I do have a faithful and hard core elite readership. My loyal family fits this latter description where a sense of filial or marital duty enslaves them into the obligatory glance, as are those that are the web-chiefs of the charities I’m associated with and must oversee the upload (as well as check for evidence of unwitting character defamation). Nevertheless, I’m always happily surprised when a prospective volunteer contacts me and mentions reading the blog which has then been the catalyst to find out more about the whole volunteering in Myanmar business: and they understandably want answers – the sort of what, where, why and when?

Before I get onto answering any of these, and I promise I will, I do ponder as old people do how things have changed since my generation stepped onto the treadmill of training when the experience of working in a ‘developing country’ was regarded as excellent preparation for medicine as well as life and was encouraged by your mentors; a sort of ‘pull and push’ as opposed to now when the ‘pull’ is undiminished but, instead of a ‘push’, there invariably is a depressingly discouraging chat with your educational supervisor who reminds you that stepping off the training scheme will penalise your chances of becoming a consultant or fully-fledged GP by 30, after which you’re really not sure if the Myanmar option is the best move. But from a medical training perspective it is tempting. No age-accelerating and emotionally-draining A & E rotas for a bit; no meetings with your supervisor because your attendance at the lunchtime educational sessions has fallen below the obligatory 75%; no calls from the mandatory training team to inform you that this is incomplete because you never made it to the fire lecture; no refused request to change your rota schedule to be best-man at your friend’s wedding; and finally, but most importantly, realising that you’re going to be doing the end-job till your 68 so why not do something really different and worthwhile now? Apologies for this early Saturday morning cathartic ramble which is the problem with blogs in that the reader is at the blogger’s mercy, but I do think it’s so much harder to now do what your body and soul is telling you is the ‘right thing’ for you, in so many ways. And apologies for focussing just on the doctoring bit as actually everything I have to say applies to all healthcare workers. 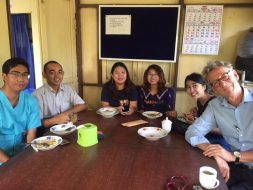 So, where and what would you be doing? You’d be working for Medical Action Myanmar (MAM) which hopefully you’ll have read about in one of the blogs and be mainly based in Yangon where you would work in the 6 suburban clinics, which vary in size and patient activity – selection shown (above). Nevertheless, depending on how long you’re here for, your level of qualification, and your skillset, you may occasionally visit one of the more rural clinics. Outside of a motley crew of other volunteers from all corners of the world, you work alongside the Burmese staff who are a super bunch (right) and who, outside of slogging endlessly away at the ever-increasing number of patients daily, do two things with surprising verve and vigour: eat, and karaoke. You’ll admire the former but contemplate why they don’t all become diabetic chubby-checkers as they demolish ginormous portions of carbohydrate-rich grub at breakfast, lunch, and no doubt dinner; and be surprised at the latter, as well as learning a little of the local lingo as you sing along to a Burmese cover-band version of Abba’s Dancing Queen. And of course, no mention of the ‘where and when’ can pass by without reference to the weather. This last few months has seen temperatures reach a zenith of 43 and humidity of 80% but now we’ve reached that predictable male menopause moment where, without forewarning, the temperature’s fall to the low 30’s and we all dress differently preparing for a different world – one with rain (picture 5, below, taken yesterday). 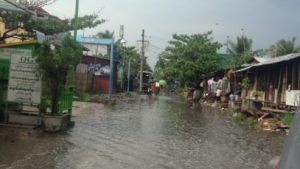 So, to develop the ‘why’ a bit more (and apologies to the non-medics who have permission to skip this paragraph), you’ll see conditions you’ve never heard of and best of all learn to spell them such as talaromycosis (this man came into the smallest clinic yesterday which I just happened to be visiting (left), as well as many you’ve read about but never now see in the UK– especially those opportunistic infections associated with underlying HIV infection. You’ll see the consequences of deprivation, poverty, and non-existent basic facilities such as electricity and clean water (picture 7), and you’ll see more TB in six months here than you will in the rest of your hopefully long and productive working life. You’ll live within a different culture and you’ll meet a bunch of similarly-minded volunteers who, despite challenging their guts and livers every evening with the extraordinary culinary array of excellent food and Myanmar beer, all believe that what they’re doing is right for them and right for the patients (below, left). And of course, you see a stunning country which has not yet opened to the McDonalds of this world with sites that leave a life-long memory (below, right). But reiterating my pitch from last week, whatever your type and level of training, however long you can spare whether it be two months or two years, you’re never too junior or too old to volunteer.

So, in the ‘other news’ finale to this blog; top of the Myanmar pops after the rubbish dump fire was the announcement that we’ve had four earthquakes in the last few days, one of which was a rumbler of at least a minute when you’re wondering as you sip your G & T whether you should make a dash down the stairs and out of the block of flats, or just have another drink to calm your nerves. But no need for the family to open the safe to get the life insurance policy out just yet as the Myanmar Earthquake Committee have reassuringly stated that many minor tremors don’t add up to an imminent whopper – hopefully not an example of ‘Trumpesque’ fake news as, like the beloved president, this country has a history of significant covert events (albeit in Myanmar’s case from the junta days). Lastly, and this is another unavoidable memory to add to the street dogs, is the chaotic driving. There are limited rules and only around 5% of the cars are left-hand drive – and this is a right-hand drive country courtesy of a decision in 1970 to switch sides overnight on order of the military ruler General Ne Win. The two theories for this are that his wife’s astrologer said that the country would be better off driving on the right side of the road, or that the General had a dream that the country should switch directions. Either way, the General called the shots and traffic was directed to move sides overnight. Problem was that there was an added ban of imports of left hand drive cars, which makes driving an art and a near religious experience as passengers pray for safe deliverance to their destination. Hence, it was with amazement to read that everyone must pass an exacting driving test where zero-tolerance exists. The coup-de-grace is that you are given 90 seconds to slot into a parking space barely wider than the car itself and allowed to shift from reverse to drive only once. Touch the curb and it is game over. Now it’s a fair number of years since I took my test, but I can’t remember even the meanest of examiners being quite so harsh?

Anyway, you’ll remember that my blog-writing Saturday morning takes place in the luxurious and very Western air-conditioned Myanmar Plaza and is fuelled by two double espresso macchiatos in my favourite little coffee house: true home-time, but it’s time to finish till next week.