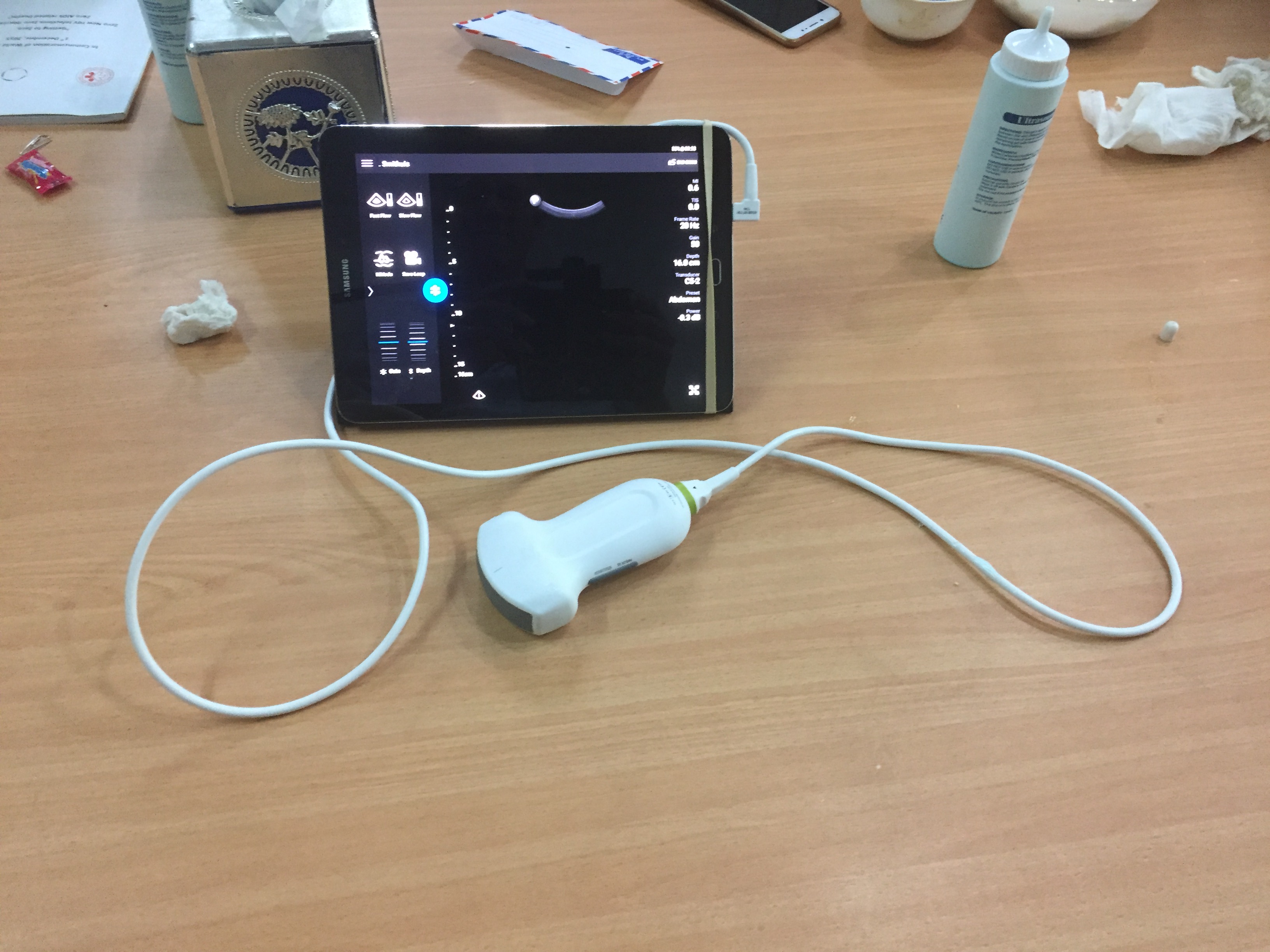 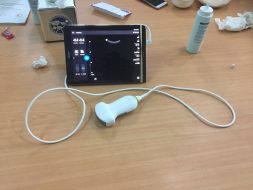 A couple of noteworthy events (well to me anyway) happened very soon after I arrived in the New Year. I failed to mention them in week 20 so forgive the chronologically chaotic order of these pot-pourri of memories that form these blogs. Anyway, no sooner had I arrived and made my way to what is lovingly known as the ‘top’ office (to distinguish it from the ‘bottom’ office separated only by a hill and a swimming pool) than I found myself guinea-pigging a game-changing ultrasound scan machine that consists of just two pieces of equipment, a standard curved probe and an Android tablet uploaded with the necessary software (right). This was being demonstrated to a complement of mainly female MAM doctors by the brother of the founder who’s a Dutch radiologist and of course yours truly volunteered to be scanned. As I undid my shirt and rapidly reached the point of no return (left), I pondered the fact that at my age I may well be brewing something sinister somewhere

(which I’ll call SSS) in my abdomen and I was also worried about the state of my liver (free beer story from last blog). This being coupled to the fact that in six months’ time I’m due my routine NHS screening scan to exclude an AAA (abdominal aortic aneurysm) and how nice it would be to put off any revelation that will put up my travel insurance premiums just a little longer! But, all readers will be glad to hear there was no SSS or AAA and my liver resembled that of a Quaker’s. Definite cause for celebration yes, but the real reason to celebrate is the versatility and potential utility of this imaging development for LMIC and settings such as we have here. Except for the probe, one just needs a tablet of some description and the downloaded programme and it can literally go anywhere anytime and be used by pretty much anyone with the training. Picture quality is nearly as good as the departmental machines: of course, cost is the obstacle to be overcome but hopefully this will fall if uptake increases. But what a difference it could make to diagnosis!!

The second notable event I forgot to mention was another age-related fall requiring minor A&E intervention. In summary, a bruised and battered head, a presumed fractured rib, and very damaged pride (right). But this time there was no need to be relieved of all my dollars and claim on my health insurance again by a quick trip to the private sector. No, watching me fall was the latest young (very) volunteer who happened to have brought half the store cupboard from Kings Hospital A&E department and proceeded to glue my head back on. Slight embellishment I realise but the scar has merged with my ‘laughter’ lines and is a testimony to her steady hand. But, walking is hazardous, and a rule of thumb is that you should always look down when walking lest you fall foul of the dangers that await you, except of course crossing the road which is a hard-core Russian-roulette adventure when you really need excellent neck rotation as vehicles travel towards you from all directions simultaneously. 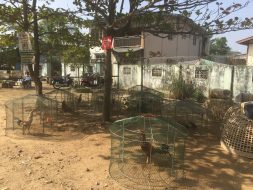 So, to return to the clinics, much to their irritation no doubt but I often find I’m reminding the doctors about standard clinical examination, especially neurological. I expect I would have irritated my wife just as much were she still working because GP’s surgeries are just as busy as the clinics here. But the patients are just so super-sick you must be on the look-out, and where you don’t have ready-to-hand investigations, the history and examination are your best tools. With that in mind, I turned to my bete-noire which is examining the chest through clothes. Given the background noise from an open clinic next to the road which with a ‘decibel-reading’ app I downloaded recorded a noise level that never fell below 78 decibels and on occasions rose to 110 – equivalent to a Sharapova grunt – it’s a miracle you can hear anything even with your stethoscope diaphragm pressed firmly against the naked skin. So, through clothes it is nigh impossible. The noise level is compounded in one of the clinics by the fact they are training cockerels to fight right outside the clinic (left). Paradoxically, despite the noise level, compared to the UK a full examination is more likely to give you a diagnosis because patients present with such advanced disease. And so, I persist with taking every opportunity to remind and reinforce the importance of examination, something us oldies grew up on of course.

A major covert epidemic in Myanmar is hepatitis C. The prevalence is estimated to be 2% and accounts for 25% of cases of cancer of the liver. Unfortunately, being a blood-borne bug, the HIV epidemic infects the same groups, especially injection drug users, and hepatitis C prevalence in this group is 60% with current treatment access for all sufferers nearly non-existent. This is aggravated by the fact that a combination of fear of persecution and enormous stigma has meant patients present very late in their disease when they have established cirrhosis. This has been recognised by many agencies including MAM and their sponsors. Of course, the difference now is that something can be done about it and patients cured easily 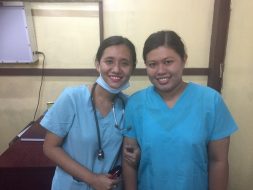 where the drugs are available. The good news is that MAM has some! A pilot treatment programme for hepatitis C in patients who are co-infected has been running in the main MAM clinic for around 8 weeks and is recruiting well with 80 patients out of a planned 200 already enrolled. Work-up and evaluation would make the liver bods back home proud with FibroScan and ultrasound scan being done on all by the ‘hepatitis team’ (right). They receive a combination of two drugs for 12 weeks and, though no results are through yet, the majority should be cured. But two hundred is just scratching the surface: later this year, a much more extensive national programme is planned to start which is great. Still, it will be getting access to those that need treatment that will be the problem (injection drug-users, MSM, commercial sex workers, prisoners, and populations caught up in conflict zones). 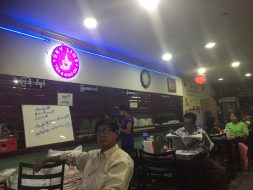 The local nosh house for Burmese food is called Skyline and is the go-to place for all volunteers for the best local cuisine for under a pound (left). Added to this, is the premier league matches which are thrown in for free – perfect for the early weekend matches (remember 6 and a half hours ahead here). So, given the best team in the league (Manchester United, of course) is well supported here, a night at Skyline can be paradise with tasty food and an excellent football team. It so happens today is Sunday and 12 noon UK time and with my flat mate who, despite being Dutch, is as mad about football as me, it’s time to get some grub! I’m trying unsuccessfully to teach him the fundamentals about cricket, but I can’t see much future there. Anyway, the internationals finished today – England won again. So, I’m happy until tomorrow, when I realise it’s time to catch up on another blog!