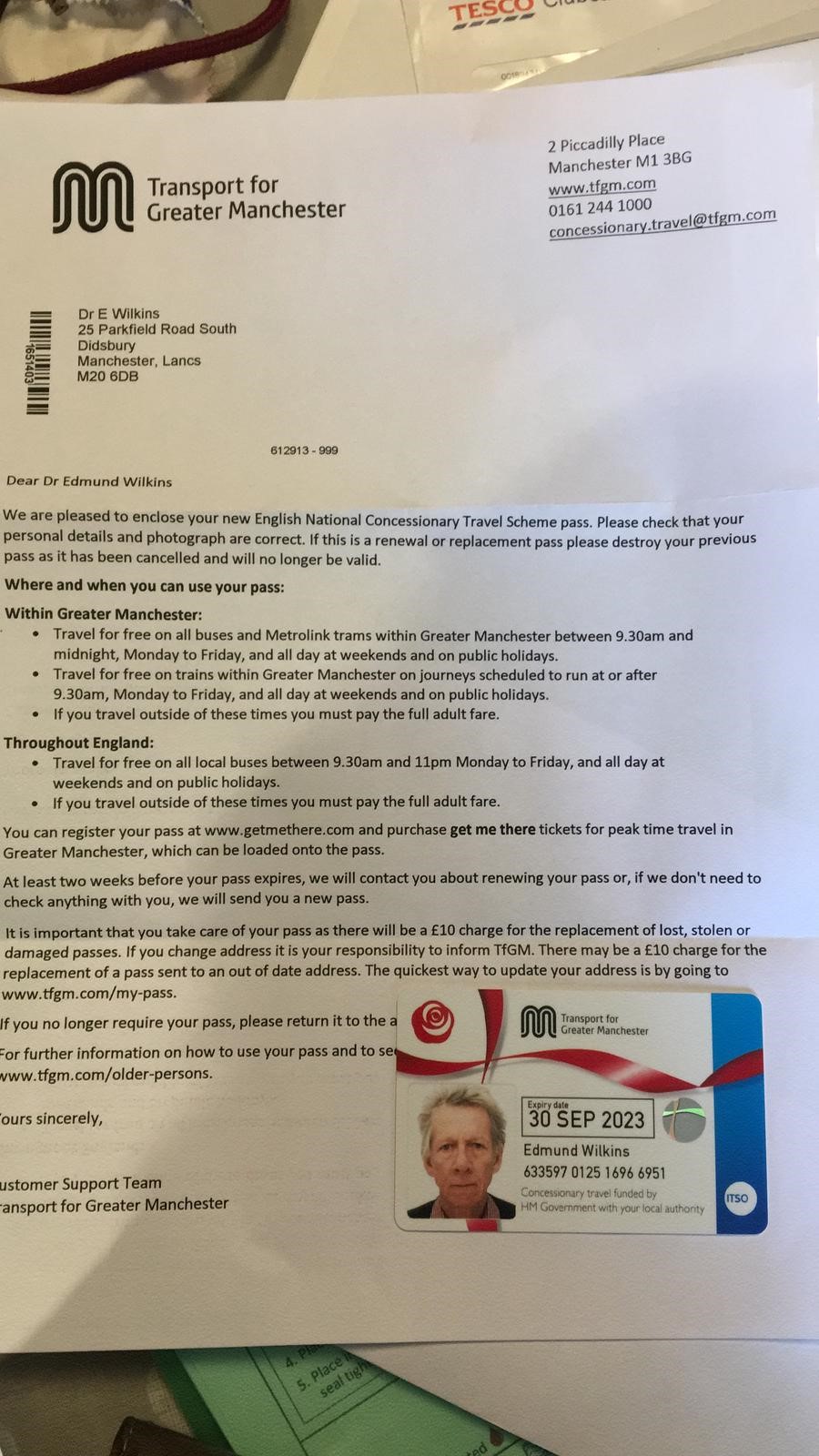 Well, here goes with the latest in a slew of blogs culling my back log of posts, albeit I’m certain any obsessive professional blogger would regard this as a couple too many for a peaceful night’s snoozing. But to me, it’s job well done for now as any more would test a thinking human’s patience, perseverance, and as most of my blog-readers are family members, paternal or spousal affection. You might ask how any sane-minded blogger can prattle on for so long about so little and leave the reader no wiser about anything? Beats me too, but again I regard this as a gold-medal winning formula as at the end of the day there’s space on the page to fill and, unlike any author with writer’s block, this affliction is one I’m hyper-immune to. As it happens, there are a few interesting developments to

tell you about relating to Myanmar and my work here but I’m saving that till I’ve shared my experiences of achieving 65 and what comes to those who wait and, more importantly, survive. As mentioned, there is the much-anticipated bus-pass (right), pension, and of course a good knees-up with family which was a must-be-at-home day on the Myanmar calendar (left). I also got some good pressies, which any self-respecting old-age-pensioner snaps up with delight! As for my first pension packet, well that’s already been earmarked for my final return flight to Myanmar where I’m ending my 23-month stint to be back in time for carol singing and Christmas pudding (which none of the next generation seem to like – all the better for the oldies)! But I told you all about that last time. As promised, there are tales to tell so let’s get on with it!

In one month exactly, the two charities I work with are collaborating in putting on a conference on TB in its many guises and varying levels of human deadliness: bad, super-bad, downright horrible, and presidential reprieve is the only chance. In case you’re confused with my illogical thinking and English circumambulation, these refer respectively to complex but sensitive TB, TB co-infection with HIV, MDRTB which stands for multidrug resistant TB, and XDRTB which stands for extensively drug-resistant TB. Myanmar is on the WHO target list for the triple-decker stacked Burger King of those pernicious deadly trio. Of course, there is the perennial problem of securing funding and getting the bottom line signed off by the sponsors for the conference, organising speakers and international flights and visas, making certain the correct boxes are ticked for the 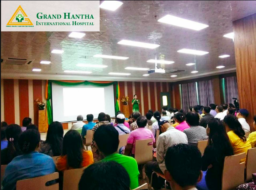 Burmese authorities, and getting the delegate invitations out. Making certain the revival package of frequent drinks and replenishing grub is available to feed the masses, the air-conditioning is working (otherwise post-prandial snoring is inevitable), and the venue is confirmed on the right dates (doesn’t look to bad) (right) are all a must-do! And the check-list must be organised in six weeks! It’s the equivalent of a shotgun wedding where the sermon is two-days long, non-alcoholic communion wine is served frequently, and when it comes to the bit about ‘does anyone know any reason’, many of the guests like to have their ha’pence worth and start speaking at the same time and the vicar earns his silver salver collection. So careful preparations are imperative, and

credit must be given where credit is due. Wonderful Muneezay is the fulcrum at Green Shoots Foundation (left) and it is her who helps keep me sane, applying hypnosis to keep me calm and working her snake-charmer like skills on any Burmese high-command official which is much more important and an unwritten essential in succeeding in this wonderful nation. So, I’m now scurrying around finding cases to challenge the top-notch international speakers and getting the MAM doctors to do the presentations: it’s an important opportunity for them to showcase their knowledge and presenting skills. It’s also a good time to remind everyone about the fantastic and life-saving contribution that MAM and other NGO’s make to overall healthcare in Myanmar.

And now for something completely different, and for those who remember Monty Python’s Flying Circus, this makes sense as a recognisable catch-phrase: I realise for the rest of you, the humour-element if ever present is lost completely so apologies. You’ll remember there are 4 main clinics in Yangon named after exotic flowers which were pictured as an end-piece to my last blog and were the best I could muster from my i-cloud collection from my many visits over the years. Many of the difficult cases seen in these clinics and indeed in remote ones need MDT discussion, especially HIV and hepatitis, and there is a system developed where this is dealt with by a circulated e-mail proforma – and it works well. So, this is a case discussion from yesterday but which I got around to this morning. It is a common but still retrievable situation if handled correctly about two children with HIV whose dad died two years ago from that same infection and where mum, who alas is also afflicted with HIV but inevitably must earn dosh to keep the whole family afloat and fed and so is often away, leaves the kids home-alone during the day to deal with life on their own. Hence, although technically the responsibility for getting the meds into both children since the dad died has rested on mum’s shoulders, she has ceded this responsibility to the eldest child aged eleven. Mum admits to not taking her meds so it’s not surprising that the two kids are also clearly not taking theirs and failing anti-viral therapy too and have high amounts of virus despite being on what were originally good meds. All ways round, the three of 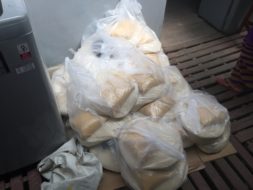 them will have a resistant virus and the eleven-year-old needs to get on with the switch because her immune system is starting to fail badly. In the UK multiple agencies would come into play and social services, paediatricians, specialist nurses, child psychologists, to name but a few, would be working full time to correct the parlous problem and this situation of poor adherence consequent to social deprivation would just be impossible. The choice of the next drugs to switch to would be wide and a resistance test could be performed to guide the next combination with another team of virologists, pharmacists, and visiting counsellors would be there to support and be in direct communication with the family. Not the case here, there is only one combination to switch to and that’s a fair few tabs and these must be combined with another two drugs: so much more challenging than what they’re on now. But the teams here will work their flip-flops off and provide an amazing amount of help: but they cannot resolve the situation of providing money (although they can nutritional supplements) (right) and that’s a fact of life here. Alas, the healthcare system in the suburbs reflects Myanmar’s desperately low investment of GDP proportion into healthcare. 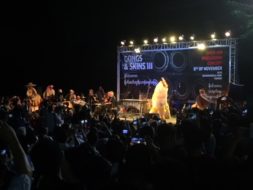 Happily, for me my two pages are nearly up: sadly, this means I must get on with my distance learning ‘History of Art’ degree which is a source of much amusement to certain members of my family. As my appendix to this third blog then here are some pictures and tittle-tattle about life here. First, during the week there was an unforgettable park concert of percussion performances from drummers and others from all over Myanmar and other countries from Senegal to Canada beating sound producing instruments rhythmically (in some instances) and the occasional stage presence of a pantomime-like llama (left). What this was meant to represent no volunteer knew but the event was extremely well attended and great fun. Then I tried out ‘Binko’s gym’ another evening which is conveniently close (right) and, even if the idea of building a Ronaldo-like six-pack is not 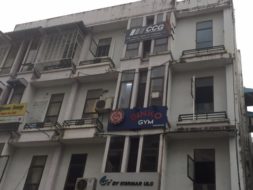 my intention, still had some bikes, a cross-trainer, and a treadmill which looked fine for me. Having paid my 3,000 Kyat (one pound 50 pence), I found the bike seats had not moved from ‘Burmese height’ for some time and being a foot taller this was not good for the back and joints of an OAP, the cross-trainer was like skiing down a red-slope with no resistance whatsoever – positively dangerous, and only the treadmill lit up and worked: still worth it though because it was five floors up which was good enough exercise for me. Lastly, for my finale weekend after the conference I’m off to the coast down the slither of Burma that goes down the south-east side (below); not something that’s ever interested me before but more to show what tourism potential this country has (and it should be fun as well) – after which it’s Manchester and much as I love this place, it will be ‘Home James, and don’t spare the horses’!

Again, I’ll be getting another one off after a week but take a breath all! 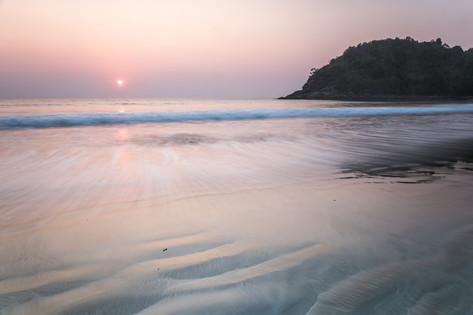