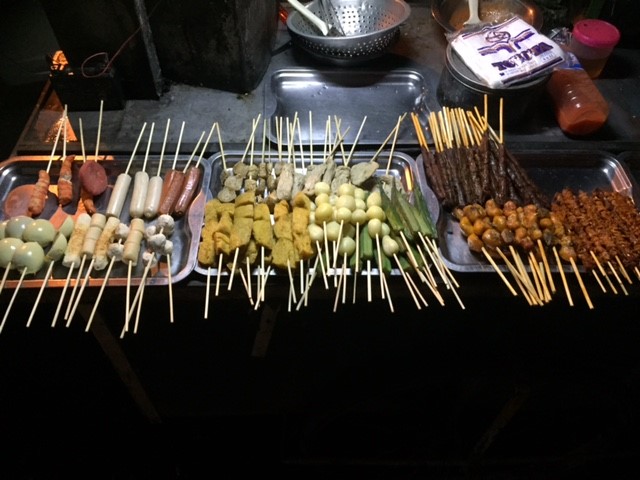 Much as I was getting into the swing of blogging, a trip home gave me a legitimate excuse not to put fingers to keyboard: reading about my life-enhancing experiences with a first world existence of Cornish holiday treats with the family would not quicken the pulse of many. As an antidote to this Hedonistic home existence, back in Myanmar it’s not unexpectedly exceedingly hot and humid hard-work again, but a happy second stint is well underway and welcomingly far from the madding crowd of political electioneering. And that all means Saturday morning blog-time in the air-conditioned Myanmar plaza with it’s flat-whites and fast internet: my home-heroine and good excuse for the verbose and uncensored wanderings. Sincerest apologies for this. Now of course this paradise of air conditioning is unfortunately the harbinger of western culture and cuisine. Such temptations as Myanmar idol, BMX biking, and bowling alleys are all harmless. However, the skin prickles at the arrival of KFC, Pizza Hut, and Uber: still thank heavens, MacDonald’s has yet to trespass.

In the world of volunteering, life-spans are understandably brief. No sooner do the super-young docs, nurses, engineers and other all-comers arrive than there’s a fare-thee-well party. Admittedly, I’m no better, popping to and fro on my personal space-shuttle to Yangon which is made feasible by the benefaction of Green Shoots Foundation, a good pension, and a super-awesome supportive wife! Unlike me, the young volunteers are either stopping-off for a breather from back-packing the circumference of the globe still uncertain of career choices, taking time-out from their National training scheme (often because of uncertainty as to where and when it begins, such as for doctors in the UK), or because ‘gaps’ have mysteriously and unexpectedly appeared in their careers which require filling. But, common to all is the desire and willingness to help in whatever way they can and, most importantly, for nothing. So, my young coterie who managed my IT and kept me sane have all but been replaced aside of a few hardy souls with another young but equally motivated international set. Where am I going with all this you may well ask? Just that anyone reading this who may be pondering what to do for 2-3 months, neither the time you have available nor the level of training is that relevant: the important thing is commitment to be involved and basically help those in need. The rewards are immeasurable and arm you with innumerable stories for your future grandchildren. 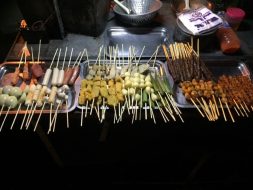 Food has always been a favourite theme of mine and I won’t disappoint you in this blog. The lack of burgers, French fries, and coffee outlets has so-far reassured me that there is something unique about the Burmese culture towards eating which is different from other areas of the world where the fast-food and coffee companies have invaded and conquered all that dare cross their paths. The worry of course is that the street vendors selling Wet Thar Dote Htoe (literally pork on stick), which is pork offal (and nothing is off limits) cooked with soy sauce and skewered onto a bamboo stick (right), will be out of business should the population turn to walking with mouths filled alternately with fast-food and coffee looking religiously at their mobiles. I’ll stick to the pork but, beware, you may unwittingly be getting a little pork brain in your yummy salad. And talking about food and a more serious medical problem, I’d like to mention the poor old snake. Speaking to the Head of the Yangon

Tropical Unit who attended a conference that Green Shoots Foundation organised, I learnt that snake-bites are the commonest cause of ward admission to her unit. Up to 15,000 patients are admitted to hospitals around Myanmar annually, mostly resulting from envenomation from cobras and kraits. The cities attract people who in turn throw food away attracting rodents and consequently snakes. One was found in the process of ingesting a rodent in our MAM office recently (left): be reassured though, you can get snake-bite insurance at a very reasonable rate payable on your death which is useful since there is insufficient anti-venom to treat all. And back to the food theme, unfortunately for the snake the Burmese like a bit of snake and so they are not an infrequent addition to the menu.

As an identified top-thirty priority country for special focus by the WHO because of the overlapping epidemics of high incidence HIV, TB, and MDRTB, there is an anticipated shortfall in funding the roll-out of ART and meeting the 90-90-90 target by 2020. Now dipping into back-pockets isn’t going to solve this as it is a mere 76.5 million dollars over 3 years so we’ll be collectively a tad short. Given the great strides made in

Myanmar you sort of believe that it doesn’t make sense unravelling all that has been done and the money will be found, somewhere. As a reminder if one was needed as to the dire situation, today I’ve seen two cases of disseminated TB with meningitis, a case of severe IRIS from omental TB nodes necrosing, what I believe is bilateral acute retinal necrosis, and a case of mycobacterium avium (all in late stage HIV), and yes, a case of ulcerative colitis. Common to many of these is additional steroid treatment which is an oft forgotten key drug in countries with limited health resources. Still, I’m surprised with all these opportunistic infections dominating ward admissions, PCP has not featured even once? There are many good and valid reasons you might be pondering right now to explain this but remember, nearly everyone has a CD4 below 100 when presenting with their fever, cough, and breathlessness, and I sort of think after all these years of diagnosing PCP I might have spotted one. And an addendum to yesterday, I find today one of the disseminated TB cases has MDRTB and is off to the MDRTB unit, and another case has come in with confirmed TB and cryptococcal meningitis on a CD4 count of 60; a lesson for those learning the HIV trade – don’t just stop when you have a single opportunist diagnosed, carry on looking. For those medically minded, MDRTB accounts for 5% of all new TB cases and increasingly XDRTB is being seen: a worrying scenario on the backdrop of an increasing HIV epidemic. 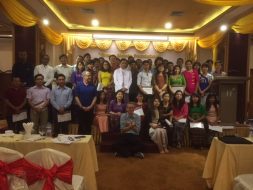 A key aim of Green Shoots Foundation is to promote and facilitate education on the major infections that afflict the population in Myanmar. So, with the unstinting aid of the fantastic UK Green Shoots team, we enrolled some wonderful speakers from abroad (who also donate of their time and energy gratis) and put on two educational events in Yangon and Mandalay (left). Now, this is not the World AIDS Conference, but both venues were packed out confirming there is a huge hunger to learn and absorb the latest news on HIV, TB, and hepatitis from the very best and brightest brains in the West. The preparation for this has absorbed and exhausted my 63-year-old brain and frame this last month but it was another step in the right direction for Green Shoots’ to educational mission here in Myanmar.

Probably time to pull out of this blog. One thing I really miss on my trips back home is taking time out to sip a hot black tea in a market or at the side of the street. It is not just a refreshing break but a cultural experience and a touch-stone to colonial times. Time for a sip.