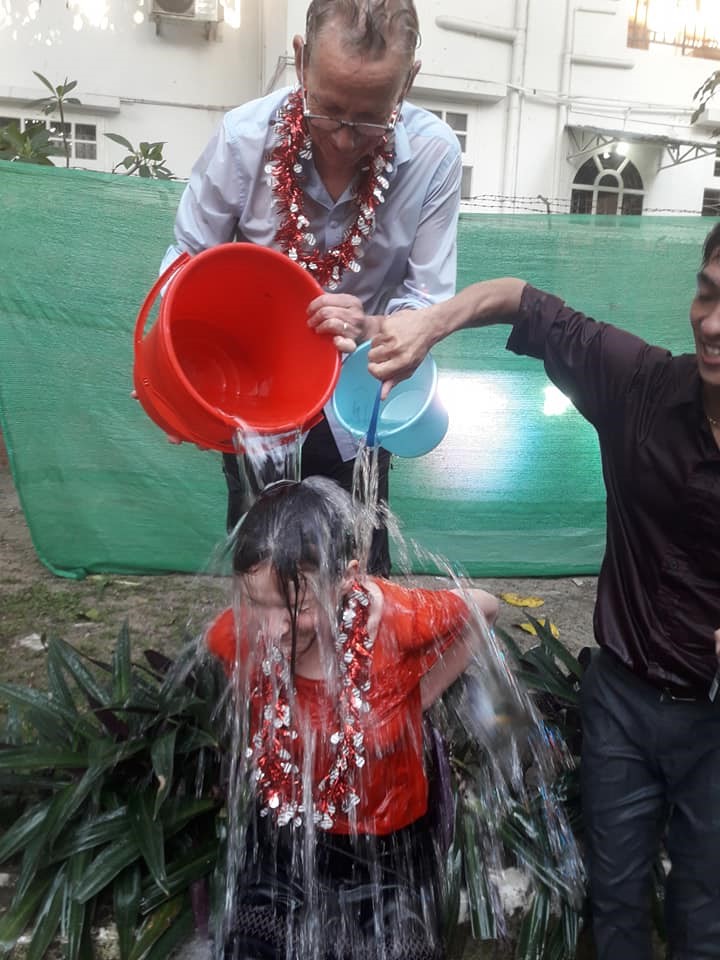 Unless you’ve experienced it, and seeing the pics is definitely not an alternative, the Burmese New Year ‘Water Festival’ or Thingyan is an absolutely crazy time when you have to submit body and soul, but especially body, to the combined equivalent effects of being hosed down at a student ‘demo’ and being in charge of thirty children at a ‘Club Med’ holiday in the Mediterranean wearing a tee-shirt saying ‘please throw a bucket of water over my head’. This is combined with a desire of the young to consume as much alcohol in the shortest period of time that they can while simultaneously driving to hosing stations where hotels and companies put up stages where scores of hoses are placed to ‘cool down’ and possibly ‘cool off’ the high spirited open-truck all-day happy-hour riders in their moment of soon to be forgotten ecstasy. And not that I’ve progressed on much from Bach and the Beatles, but ear-drum rupturing music pounds from every available speaker and around every corner. Not a day to get hitched up publicly, or indeed

any other occasions where glad-rags and summer hats are proudly on-show: indeed, no safe havens exist outside of one’s own flat. Dad’s are out with their kids who have top-of-the-range machine gun water shooters and there’s no doubt that a few white skins are worth maximum points on the ‘I-spy’ hit-list so you are a prime target. Still, with a few cans of your own and some high-spirited company, it’s not difficult to get into the swing of things (right). But Yangon is not the place to be during the Water Festival, for those who’ve come to the city to find love or fortune who return to families to catch up on news, box sets, and partake in the religious element underpinning the whole thing. Nor, is it where you want to be to experience the festival at it’s very finest and be at the heart of the alcohol-fuelled activity, and the Mecca for this is Mandalay (where, unsurprisingly many of the young volunteers headed for including my Dutch flat-mate who is quite evidently not a founding member of the Yangon Temperance society). And if sun and alcohol are not enough to tempt you to the cultural capital and you’re looking at something riskier, whereas dogs and taxis define Yangon’s streets, it’s motorbikes for Mandalay  – just a tad more dangerous at the water festival (below left)!

It’s not all bad though. For those partaking in the spirit of things it allows relief of built up emotions, drying out isn’t a problem as it’s 38C and in fact every now and again the dousing is pleasantly welcome, and for the off-licences it’s the equivalent of Christmas, New year, the Office party, and wedding receptions combined. And the government has realised the dangers of the event. The Myanmar Times reported on a responsible drinking campaign named “Upside Down Effect” although I’m not certain how they came up with this title and albeit organised by three beer companies; ‘water-free zones’ were set up in Mandalay for those with only one set of clothes; and the message that restraint is one of the five precepts of Buddhism to be observed by laypeople (not laid-out people) was promulgated by the responsible few. Nevertheless, there are medical dangers. Let alone the alcohol-related consequences – mainly accidents, hospitals and clinics run on a skeleton staff, patients are not contactable when there is a problem, stimulant drugs are often admixed with the booze with more profound consequences, and nearly everywhere is closed downs, such as pharmacies, if prescribed drugs are needed. Hence, road-related accidents are up over one hundred percent (600 deaths reported for 2017), and an unlucky few ascend their own stairway to enlightenment: drunk to dead drunk to dead over the four days.

But you can be oversaturated as I was in a separate way with one blogworthy item, however memorable it was to my water-sodden flesh. To move onto a bit of medicine, this week has been one of rashes and getting sick patients to hospital no sicker (if that makes any sense). As I’ve mentioned ad-nauseam, scabies is everywhere (right). But for the doctor in the clinic, it is the equivalent of the GP’s review of a cured and happy patient with no hidden agenda

who wants and can be in and out of that door with alacrity, allowing you to have a sip of your cold coffee and finish off the dark chocolate Hobnob while gathering courage to face the family of ME sufferers. But more interestingly in the single morning there was a plethora of interesting rashes, including kiddywink measles, adolescent chickenpox (below, left), and full-grown man penicillium (below, right). Measles is still a problem with isolated outbreaks and many recorded deaths despite a nationwide mass vaccination programme for children aged 9 months to 5y; and on a similar note, the estimated number of neonates born with congenital rubella syndrome is one in 2000 live births – something that not many paediatricians in the UK have seen. Spotting penicillium infection immediately and doing the necessary diagnostic tests is imperative: luckily most of the local docs can recognise this promptly – something their peers back in the UK would struggle with. So again, in my ‘useful message’ chat to the new doctors volunteering here (or anywhere) is to get to know your local bugs; you probably haven’t come across them before. And as for the medical problems, the day before Thingyan kicked off, I heard about a patient who had almost certain infection of her heart valve. An action plan was put in place, but the patient was not contactable until 6-days later after no doubt a soaking or two during Thingyan which will have reduced her temperature, when she was persuaded of the importance of getting to hospital that day. This is a challenge, as not all patients want or will go to be admitted. Hence, my earlier comment of making certain sick patients get to hospital!

And this seems an appropriate time to make my pitch to any potential volunteer contemplating a trip to Myanmar and working in the clinics. You’ll live in a country which like all isn’t super perfect but will be an incredible and possibly career-defining experience, meet some fantastic and dedicated people who are adventurous and enjoy life, travel to spectacularly beautiful and memorable Kodak-moment places, and learn, rediscover (after the demoralising and strength-sapping NHS experience), or continue a love for medicine and give you a real sense of purpose (and maybe like me when you retire you still feel there is a need to hang on to it for just a little bit longer). But wherever you are in your training, whatever your skills, however much time is available, you cannot be too young or too old to help, and in becoming a member of a structure and a team, you will be valued and contribute. Sounds like a Lord Kitchener ‘Your country needs you’ moment, but you will truly find it an exciting time and there’s hardly been a volunteer in the last year who hasn’t wanted to stay longer or promised a return.

Everybody knows I love my league tables. Another new one for me, and no doubt you too, is the Transpar­ency International Corruption Perception Index: snappy title, but on which Myanmar came 136th out of 176 in 2016. Although this seems a little serious for what may be deemed a relatively light-hearted blog, the message is important and fuels many of the medical problems with its consequences. Myanmar’s economic growth is a very respectable 7.6%, which Teresa May would be rubbing her hands over and probably calling another unwise snap election, but this growth is underpinned by an informal economy which is corrupt and is one of the largest in the world. For example, half of the multi-billion US dollar jade trade 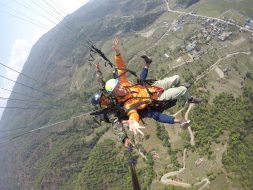 is ille­gal and this informal sector is linked to corruption, drug trafficking, smuggling, illegal migration and cross-border trade – all of which lead to a host of indirect problems including drug use, prostitution and HIV. Not easily fixable unfortunately.  And as for this being a democracy, then one must remember the country is effectively run by the military, with a strong and complex link between Buddhism and politics, which unfortunately has underpinned the recent rise of Buddhist nationalism.

Anyway, to end on a lighter-hearted note, I took my life in my hands and submitted myself to having a crack at paragliding (well, I was just a passenger actually), when I visited much-missed family in Nepal where my youngest has been volunteering as a teacher (right). Mark it in as a definite must do on your life-list of activities! Till next week then.