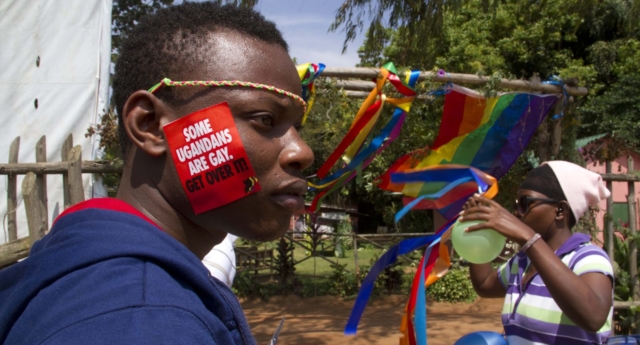 Not to break the habit of a Myanmar lifetime this blog is now five weeks late and so, if there is an avid reader whose life feels empty without reading this, then I’m truly sorry for you. And if anyone thinks they have missed a critical couple of weeks, I can reassure you that in a moment of temptation, I decided to miss out two weeks as I’m never going to put pen to paper on weeks 23 and 24 as they’re over 2 months ago (I also don’t think anyone’s going to notice). So, we’re starting again at week 25 week which is where I’m at (albeit five-weeks behind which I’ve already confessed to). Now, when it comes to heat I have several levels; factor 50 heat, flip-flop road-sticky heat, and when it’s just too hot to do anything but find somewhere air-conditioned for the day ‘heat’, but with the promise of rehydrating with water or preferably beer in the evening. Unfortunately, air-conditioned inspired cool-breeze luxury is not available in the clinics where I work although, like my blog readers, there are a few faithful fans! We’re moving fast up that scale with an average midday temperature of 38oC and not a cloud in the sky, fine if you’re slipping into the pool in a swanky hotel having Pina Coladas brought at increasingly more frequent intervals, but not if you’re sweating away in the clinic wishing for the green pastures of home and the anticipated April rain. Just meandering up to what is affectionately labelled ‘the Office’ from my flat at 7am necessitates pre and post fluid-loading (and obviously ice-cold beer’s not on the breakfast menu). 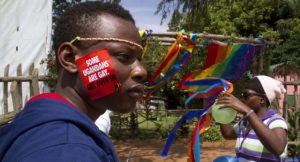 So, what’s been happening in my 6-week absence? For me, after returning to the UK and a few days as a couch potato catching up on the cricket one day series, my wife and I went off to south-west Uganda to help in a mission hospital. In fact it was pretty well staffed so I nipped off to the local government hospital where I learnt that the HIV cohort was around 5,000 (pretty much the same  as the number at the MAM clinics here) and, remembering Uganda is mostly a hard-core Christian society where homosexuality was an imprisonable offence in 2014 and where there are now moves to make it so again, there was not one same sex infected man on the books (nor injection drug user come to think of it) – well that’s what the medical staff mistakenly think! Still as elsewhere, there were too few hands for too many patients and no senior doctor with HIV knowledge: poor souls have now become recipients of my weekly HIV education modules and they’re far too polite to say ‘no thanks’.

Anyway, back to Myanmar. If you’ve read one of these blogs before, then you may want to skip over this paragraph because it’s me talking about myself again, but this is my albeit delayed first week’s blog and what happened occupied my mind and body for pretty much the whole first week (and after all it’s the prerogative of the blogger to talk about any topic including themselves, within reason that is). Somehow, I managed to add acute dysentery to my ever-lengthening list of illnesses and mishaps – there definitely needs to be a health warning for aged post-retirement volunteers. A not-to-be-recommended way of losing any new-grown flab following over-indulging in too many fridge-tempting delicacies and wine cellar tastings 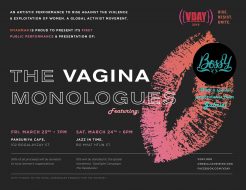 back home! Anyway, as I felt increasingly confident about leaving the flat, I went to my first ever ‘Vagina Monologue’ at the weekend which was a truly memorable experience (picture 3). Announced with a fanfare (as this was the first ever showing of the play in the country), the cast gave a wonderful performance and the focused merchandising was interesting and raised much needed dosh for some important causes (picture 4). These included a sexual education course (‘Strong Flowers’) which was aimed at teaching women about all aspects of sexuality from making informed decisions about consent, family planning, and the beneficial values of a loving relationship – all much needed. This was linked to a more practical but equally necessary ‘Self Defence’ course aimed at teaching women how to defend themselves against harassment, assault, abuse and bullying. These workshops are available to schools and businesses alike and represent the yin-yang of emancipating women in Myanmar. To add a surreal note, and of interest to seasoned listeners of Woman’s hour, I was then interviewed by a young lady from Radio 4 for my reaction. Men, especially old ones, were in the minority (I was the only one over 35), so for her it was probably to good an opportunity to miss. Anyway, she probably wished she hadn’t in the end because, oiled by beer, I waxed lyrical to the amazement of my Dutch flatmate until she had to interrupt and save some of the tape for another interviewee.

So, we’re flush with volunteers currently which is great: two pharmacists (one just about to leave), one highly qualified nurse, a post F2 doctor, and a young near-consultant in Infectious Diseases and Tropical Medicine who makes me just a little less full of myself (a very good thing!). But it means collectively, we have more to offer and can work as a team covering a wider area in scope and geography. That means a lot more education through CME and planned joint NGO lectures, the creating and running of an induction course for the new MAM doctors – you will remember they rotate every 6-9 months (this was put in place by the local MAM team so that was great to see), and at last getting all the modules, talks, algorithms that I’ve been working on for the last year on-line so they can be accessed easily by the staff here (169 talks and documents in total – even I was staggered at my productivity). It makes me realise that working as the only volunteer, and there have been several occasions, makes it harder to achieve your dream of putting your skillset to use in some small way and finally leaving with a feeling that your time here has helped (and that’s a selfish but necessary reward for volunteering) – much better to be part of a team! 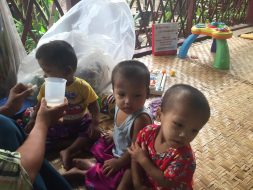 Moving to the clinic, the usual TB, HIV, and the dreaded and pernicious marriage of the two, have cluttered up the clinics during the first week as they always do, but nothing super-exotic or blog-worthy (which is good news). There was however a moment when the clinic came to a necessary hiatus as mum brought her screaming triplets in with scabies (right). Now, if you’re unlucky enough to contract scabies and you’re sharing with your siblings, as sure as scabies eggs are scabies eggs, you’re going to get infected too. But these kiddywinks can feel easy as they’re not alone; every day there must be 30 other adults and children scratching away and popping into the clinic for treatment.

But in a ‘charade-esque’ move, I want to talk about a ‘sounds-like’ disease; rabies. Ask any returned volunteer about their memories of Yangon, and at some point, in their rose-tinted spectacled account (and mine will be the same), they will mention the roaming stray dogs in every street, around every corner, outside every bar and restaurant, day and night and, dare I remind you, in every clinic (below, left). Indeed, they are as much as part of the social fabric of Yangon as the pork-stick and betel leaf street vendors. Not surprising really, as their estimated number in 2014 was 70,000 in Yangon alone. The unwelcome news is that many of these dogs are infected with the rabies virus, which if you didn’t know is often not good news for the loveable Scottie but is cataclysmic for homo sapiens as everyone contracting the infection dies. Every year 30 hospital deaths are recorded from this infection, but the number reported is only the tip of the iceberg because the majority are often not exactly in the fittest of states to make it to the hospital when the family realise something is awry. Anyway, given the renowned ‘man’s best friend’ human-canine 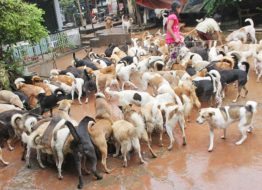 relationship, this is a tad worrisome, but the good news is that it is completely preventable with vaccine, including after the doggy leg nibble. Now, everyone has their own opinion as to whether stray dogs are menacing and mean, or cute and loveable. Often the local street pooch and his gang are known to the locals and maintained with grub by the residents who are innately kind to all living things, maybe earning some religious brownie-points at the same time. But the reality is that all volunteers (and backpackers etc.) absolutely must be vaccinated. The other arm to make Myanmar rabies free is dealing with the dogs. This is a four-pronged attack: castration, sterilisation, vaccination, and the slightly less humane, culling. Add to this a fifth part of the long-term strategy, and that is the construction of a stray dog shelter in Hlaing Thayer; all good news to reduce the problem but, unfortunately the shelter is where the two largest MAM clinics are!

Given I’m so many blogs behind I’ll come to a halt now and carry on over the weekend with the ritual blog ‘catch-up’. Still there’s much to talk about.