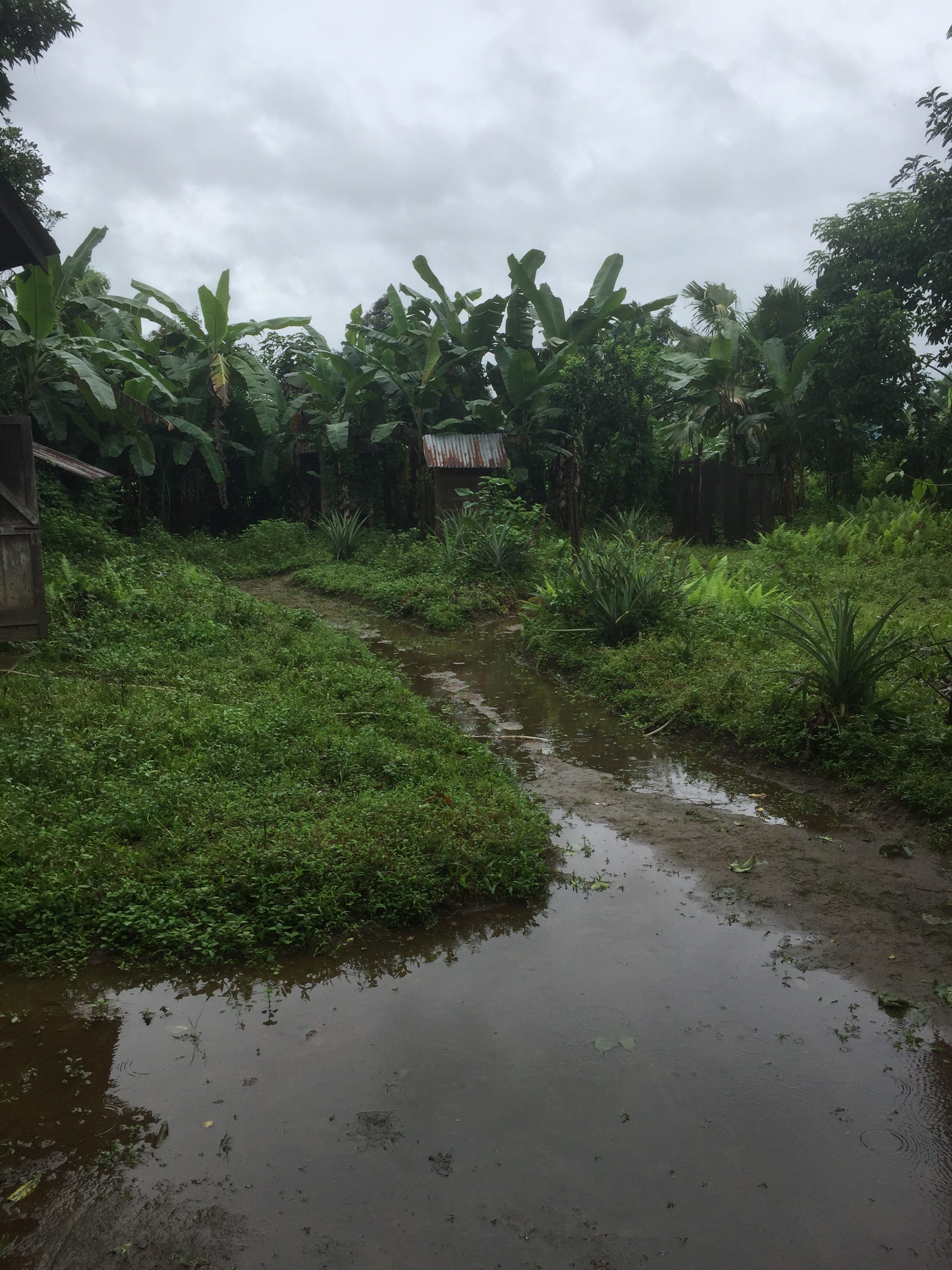 ‘Google Image’ Putao and you see an idyllic town at the foothills of the Himalayas, far from the madding crowd with undulating hills, see-through blue rivers, snow-capped peaks, and seemingly perpetually bathed in glorious sunshine. Lest you be fooled, this is not the sort of destination in the Abercrombie and Kent brochure for would be honeymooners but is a city of two seasons – rainy and winter: sunshine blesses it but 30 days in the year and unfortunately the week of my visit fell right in the middle of the rainy season. Interestingly, it is a town where there are churches, chapels and cemeteries around every corner and of every Christian denomination and where the language (Jingpho) is based on the Latin not Burmese alphabet reflecting the American Baptist missionary spirit married to the British imperialist zeal of my, and probably most of this blog’s readers (if there are any), forefathers; not that I’m proud of it! Unlike the rest of Myanmar, the religion here is predominantly Christian – although, personally I would have voted for the Sun-God. Another immediately noticeable item in this busy town, is throngs of motorbikes littering every imaginable space as this is the main and only practical way to get around.

The perpetual rain is one of the reasons why this ‘beautiful-in-summer’ town in the North of Burma in Kachin state, which is only reachable by plane or a 2-week 4-wheel drive journey and then only in summer, will always be embedded in my memory; the other being that I have suffered the mother-of-all bouts of food poisoning being confined to the hotel room for three days where I was the only guest, without wi-fi or phone signal, and where electricity only came on for only one hour every day. Now, no-one really wants to read about this but there is an important message to the volunteer and that is on these remote excursions, come prepared with a fully charged torch, a good preferably very long book, well-gripping flip-flops (the path to the drop-toilet [right] is usually treacherous), rehydration sachets, and a toilet roll. 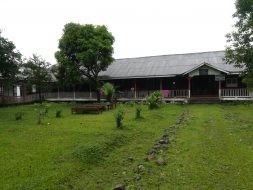 Moving onto something even less interesting to non-medics and therefore over half my regular readers (60% of my own England-based family) and that is the doctoring stuff and Putao. Medical Action Myanmar (MAM), the charity I’m attached to, have taken over two peripheral clinics to provide general care as well as responsibility for HIV at the hundred-bedded hospital (built by the British who left 70 years ago) which serves the 100,000-odd population of whom 30% live in the town (left) and which is staffed by just two doctors; a staffing ratio that Jeremy Hunt would no doubt feel to be a model for the UK. Efficiently, at the larger of these two clinics and again a lesson for pharmacies back-home, is that reception and dispensing are performed 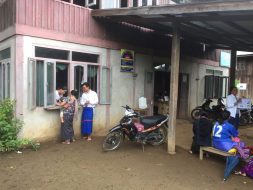 at the same outside window, a nifty method for reducing dawdling to the minimum courtesy of the endless Putao rain (right). Also in this picture, you can see the health educator who is always out talking to anyone waiting to see the doctor; opportunities to inform on health matters are never missed up here. I have written about the challenges facing the doctors in Yangon: here, they are more than a notch up. For those of you who are aspiring doctors, imagine sorting out a seriously sick patient when it’s just your clinical skills pitted against anything that the textbooks can rustle up against you. There is nothing to help you; no biochemistry or haematology profiles, no pathology, and limited TB diagnostic facilities (which is the major problem in Myanmar). There is an X-ray machine circa mid last century which produces poorly penetrated grainy quality chest films but challenged further by the fact that there is nothing to view them on; and the lab can check for malaria and hepatitis.

The latter is a genuine problem. As around half of those infected with HIV contract their infection because of injection drug use, hepatitis B and C are also both common. It is illegal to inject drugs with penalty of incarceration and unsurprisingly therefore, of those tested in prison, most of the injection drug users had hepatitis C and HIV. Although MAM and the local medical superintendent for the Putao area want to introduce a methadone maintenance programme, the obstacles are enormous. Most challenging is getting the methadone to the hospital; it cannot be flown in because of rules on liquid transportation and so must be brought overland which can take weeks and where securing safe delivery is virtually impossible. And of course, there is the limited shelf-life and Putao is effectively cut-off from the outside world except by air for at least three months of the year. 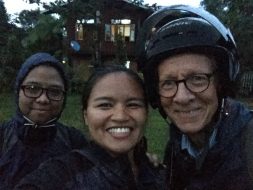 On a more reflective note, I still ask myself what am I doing here in Putao or, more profoundly, in Myanmar? On paper in Putao, I’m part of a three-person team together with the MAM project co-ordinator for the area and the senior data manager for the clinics (left). The latter pair are a formidable team forwarding the plans for development of the clinics and the link with the hospital. And yes, as a medical doctor, I’m the eyes and ears assessing needs that may be overlooked by the other two, such as an ophthalmoscope (below, right) – although the doctor here has never used one and will need training. The lovely man I’m examining (infected with HIV and very late stage) complained of going slowly blind in the right eye. In HIV, this can mean CMV of the retina, a nasty infection which eventually leads to complete blindness. Luckily, the torch light revealed he had a cataract – good for him as nothing could be done if he did have CMV. 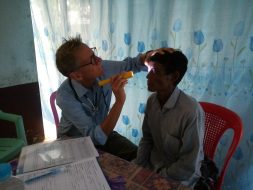 But going back to me and my insecurities, in Yangon as an educator, I am more than satisfied with the CME programme that is up and running where ownership has been taken over by the MAM team. In addition, the development of stream-lined algorithm based guidelines for the clinics is coming along. But coming to meet the single-handed doctor in this most remote of clinics has made me realise that clinical expertise is also vital and that grumpy old doctors such as I can offer a lot through bedside teaching. I like to fool myself that contemporary knowledge is now too heavily dependent on investigations, imaging, etc. Experience, gained by being as old as me allows one to work backwards and, like a bookmaker, using what you’ve learnt from working with this Utopia of investigative options at your fingertips, calculate the odds as to the likelihood of a diagnosis through clinical skills, limited lab back-up, and just having seen a heck of a lot of patients over these years. So, if you are an old-man retiree NHS doctor increasingly confounded by the plethora of new investigations being ordered by your juniors which you have never heard of, time out in settings like this are an enviable personal swan-song and of invaluable help to the medical and local community.

But back to MAM, their commitment to this area and to invest in care for patients through providing staff, transport and equipment, is a model of what an organisation can do if it believes in the justness of it all. If only the UK government could see this, reread the founding aims of the NHS, and realise that believing in a precious institution like the NHS and investing in staff and services, would do so much for so many, and help retain its junior doctors, nurses, and other health workers who are seeping into the globe’s further reaches, especially the richer ex-colonial ones.

Now, not having learnt from my recent poisoning experience, I was taken to the only local eating place my penultimate night and partook of a meal where not even my colleagues could tell me what we were eating. Their motto is the more you drink the less you worry about the food and they were certainly not worried; maybe the disinfecting qualities of the alcohol will have done the job in removing any risk of a further attack of food poisoning. I genuinely hope so!