Hit enter to search or ESC to close
NewsSport 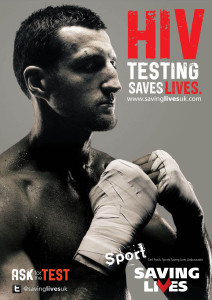 One of our most prominent supporters and ambassadors, IBF and WBA super-middleweight champion Carl Froch, has a big fight planned for this weekend: he is defending both his titles Froch in a rematch against George Groves in front of a record 80,000 crowd at Wembley. The rematch comes after a fight against Groves in November.

Carl has been the face of one of our big HIV testing campaigns in his home city of Nottingham, so we’re supporting him all the way in return. It’s going to be a massive fight – but here’s to Carl coming out as the winner.

The promoter, Eddie Hearn, is calling this the biggest match in British boxing history. It’s definitely a big one for Carl – and for all of us at Saving Lives. We’re rooting for you, Carl!