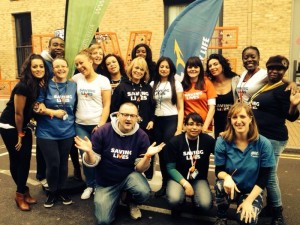 On Saturday 24th May 2014, Healthy Gay Life (HGL), Saving Lives, and Sexual Health Services from Heart of England NHS Foundation Trust set out in the pouring rain to deliver sexual health testing at one of the biggest events of the year in the gay community, Birmingham Gay Pride 2014. 23 staff members of HEFT’s newly  integrated sexual health team ,both clinical and non clinical alongside 3 volunteers from the community, worked together to offer free HIV & Hepatitis tests to as many gay, bisexual, trans and men that have sex with men as possible.  The quick, simple dry blood spot test can be taken in an outreach/community setting rather than a GUM clinic to target the most vulnerable and high risk groups. We are very grateful to the HIV awareness charity, Saving Lives, who supported the whole weekend. HGL’s community based service in Bromsgrove Street allowed us to be right in the heart of the gay community to deliver this community outreach testing service as well as providing a stall in the main parade which gave us the opportunity to give information & condoms to everyone who attended the weekend. Our on site disabled testing booth allowed wheelchair users the chance to also get tested on the day and was very well received. Volunteer staff accompanied anyone who expressed an interest in testing to the Bromsgrove Street premises from the stall ensuring continuity of care and making people feel reassured and at ease to have their tests completed.

Not only did the staff offer testing, they also gave out free condoms and advice around condom use, sexual health, substance misuse, rape and sexual violence. Some of this advice was in conjunction with the HIV Prevention England (HPE)  ‘It Starts With Me’  campaign which promotes condoms by focusing on the HIV risk presented by undiagnosed infection.  Recent studies show that amongst gay and bisexual men with HIV, around one in five (18%) do not know that they have it. The majority of people with HIV who are unaware of their condition feel perfectly fine for many years. On average a gay man will have HIV for over three years before he is diagnosed and as he will not usually have spent this time feeling ill this gives us even more incentive to test for HIV to ensure early diagnosis where possible.

Healthy Gay Life has been attending Pride since 1999 with lots of positive advice & information but only recently started testing last year. Last year we tested 187 individuals but this year we managed to increase to 216, 48 people had never been tested. Also as part of HEFT’s Bee Sure chlamydia screening programme, we gave out 38 male chlamydia tests and 35 to women over the course of the weekend.

They were asked for one word to sum up and thanks to the team most of the responses were along the lines of:  “Great, Fab, Brilliant, Efficient, Amazing, Excellent, friendly, Helpful, Good Service, and Attentive”. One comment received stated, “Brilliant. A lovely atmosphere and a lovely Team!” Another bit of feedback came from a young man who  told me  when filling his survey form in that he only came in because ” of your small pretty Asian girl  who was out in rain talking to people from your services, she was so kind to me and reassured me to come in”.  He had never been tested before either so well done to the team!

Even throughout the adverse weather conditions, the staff stayed positive and worked incredibly hard at all times in a very busy environment. I am sure I can speak on behalf of everyone there to state that it was a fantastic weekend and  I would like to reiterate my thanks to all staff involved over the weekend and behind the scenes and to Saving Lives who put in a lot of work to this event and helped ensure the success of the campaign. A big thank you as well, to those members of the Ladywood community who helped with the packing and wrapping of thousands of condoms in preparation for the event.