Hit enter to search or ESC to close
HeadlinesPositive People

Every World AIDS Day is a special opportunity to remember and respect those we have loved and lost to HIV/AIDS, and to appreciate how far we’ve come in the last forty years. It’s also often a time to look forward, too, and think about all the work there is yet to do to defeat stigma and improve the lives of those living with the virus.

This year in Birmingham, all of that is truer than ever. Over the last two years, Saving Lives has supported a truly grassroots effort to install a fittingly significant memorial to those lost to HIV/AIDS – one which can also act as a reminder to everyone in our community that the virus is still with us, and can be defeated only if we come together to care for each other.

The Birmingham AIDS and HIV Memorial is the brainchild of local artist Garry Jones, with whom Saving Lives and our Medical Director, Dr Steve Taylor, have worked on World AIDS Days in the city for many years.

When he first approached us in January 2021, having been inspired by Channel 4’s It’s A Sin, Garry told us he intended to ensure a monument to those living with and lost to HIV/AIDS in the heart of the second city. We were immediately onboard – but we knew he was being ambitious. To have achieved in so short a time all that he has – alongside a team of co-founders and fellow activists whom he gathered together to share the task – is an inspiration to us all.

The memorial will be unveiled today, World AIDS Day 2022. Saving Lives was so enthusiastic about the project – and has for two years provided all the corporate, financial and charitable resources necessary to making Garry’s dream a reality – because Birmingham is our city, and because we have always believed in the power of art and community to change minds and improve health.

One in sixteen of those living with HIV in the UK still do not know they have the virus. New diagnoses are still made every week; many of those are late diagnoses, with the virus having already had a significant impact on a person’s health. All of this is because people do not test for HIV regularly … and they do not test because they are scared. 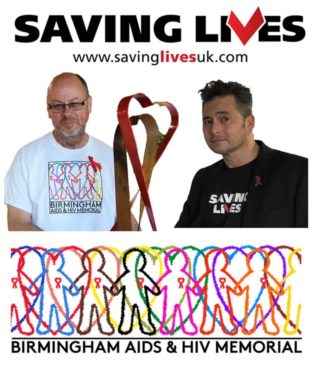 Our Medical Director, Dr Steve Taylor, says: “We are still seeing far too many people being diagnosed with HIV late, particularly heterosexuals. This tells us there are a lot of people in Birmingham and the West Midlands that are carrying HIV and have no idea. We have got to get over this HIV exceptionalism – it’s a viral  infection, and just like Hepatitis B and C we should be testing for these viruses much more often and more routinely than we are. Everything starts with testing.”

If stigma kills, then testing saves lives. The Birmingham AIDS & HIV Memorial – already widely known as The Ribbons, since it takes the form of two six-metre heart-shaped ribbons entwining, representing love and the past and future – will act as a reminder and a rallying call to all of us that there is work still to do.

But its existence also reminds us that, together, we can do incredible things. Garry had a vision in January 2021, and it probably seemed impossible to many. But today, we unveil the memorial he imagined – the largest in the UK, a work of public art that has truly national, even international, significance.

Everyone at Saving Lives is so proud of our role in helping this happen – and we’ll play our part as a custodian of the Ribbons and their message moving forwards. This is a special World AIDS Day for us, for our city, for Garry … and for everyone that believes change can be made. This year, and in the words of the Ribbons, let’s remember, educate and celebrate with renewed purpose.

To read more about BAHM and Saving Lives, download our PDF leaflet.