Hit enter to search or ESC to close
FootballHeadlinesMusicNHSPositive PeopleSport 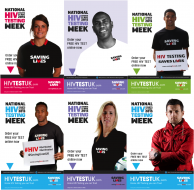 The campaign has the support of a range of sporting and celebrity ambassadors, including Premiership footballers, Olympic medalists, and DJs – and has similarly recruited a number of individuals living with the virus as “positive ambassadors.”

“We need to encourage people to GET TESTED,” he says. “HIV Testing saves lives, it’s as simple as that. And now the charity has made it easier than ever for people to get tested.

“Around one in 5 people infected with HIV in the UK don’t know they have it, which means they could be getting ill and passing on the virus without knowing it.

The charity’s ambassadors will take to social media during testing week to encourage people to #GetTested for #HIV, and tweeting to @savinglivesuk. Saving Lives is the first UK-based HIV charity to receive such widespread endorsement from so many professional footballers and celebrities – who also include four-time super middleweight world champion, Carl Froch, England and West Bromwhich Albion Striker, Saido Berahino and England ladies players, Claire Rafferty and Carly Telford.

“We know that it’s people that don’t know they have HIV who are causing most of the new infections. Unless people are always using condoms and we get everyone tested it’s just a problem that’s going to keep growing. The fact is if you don’t know you have it, then you can’t get lifesaving treatment? remember: ‘#GetTested’ and ‘Keep it Wrapped.'”

The charity’s ambassadors will be appearing in promotional materials during NHTW to raise the profile of a campaign designed to raise awareness and increase take-up of postal HIV testing.

The offer of free postal testing is set to coincide with NHTW from 21st November until the end of World AIDS Day (1st December). Saving Lives hope to increase awareness and encourage more people to get tested.

Latest statistics show that the number of people living with HIV in the UK has doubled within the last 10 years, with an estimated 103,700 people living with the condition. Of these, between 17 -20 percent (1 in 5) are undiagnosed and do not know about their HIV infection. This is mainly because symptoms may not usually appear for many years, after which treatments have less successful outcomes. In contrast early detection, and modern medicines, allow people to have a normal life expectancy – highlighting the reason why getting tested is so important.

Anyone can request a HIV self-sampling kit during NHTW by visiting www.HIVTestUK.com. Using detailed how-to videos provided on the website, recipients will be able to take a blood sample at home and send the completed kit back to the Heart of England’s state-of-the-art laboratories for analysis. It is the only service in the UK that offers users direct access to NHS quality self- sampling testing HIV kits, expert analysis and a unique aftercare service.

Dr Steve Taylor, Lead Consultant at the Heartlands HIV Service and Medical Director of the Saving Lives Charity explained how the service works

“If the result is negative, the person will receive a text message notifying them of this,” he says. “However, if the test is what we call ‘reactive’, or is inconclusive, one of our highly trained healthcare professionals will contact the person directly to provide the appropriate clinical support and next steps. This professional aftercare service is what makes this method unique and will ensure the person is supported at a time of potential high anxiety to cope with a potentially life-changing diagnosis.”

Dan Hartland, Director of Operations at the Saving Lives charity

“HIV is a public health issue which should concern us all,” says. “HIV knows no boundaries of sexuality, race or class. To keep everyone healthier and safer, then, we need to think of the most innovative and simple methods for those individuals who may otherwise never get tested – and might therefore get sicker than they need to and continue to pass on the infection unknowingly. HIVTestUK is a significant step towards achieving this objective.”

Nearly ten years ago, Lizzie Jordan became a mother, a widow and HIV positive all within an 18 month period.

“HIV positive Testing is crucial; she says; being aware of your status early enables you to help yourself. Do it – get tested and you can protect your long term health and live a full life.

“Being aware of my own HIV status has given me the opportunity to look after myself and access medication before my immune system could be irreversibly damaged. If my partner had been tested and made aware of his status, he may still be here today.

“I am passionate about raising awareness, HIV is no longer a death sentence. But you do need to be aware of your status and access help and support. You can live well with HIV, you need to know your status though.”

Tom Hayes, Saving Lives Ambassador,  who was diagnosed with HIV in 2011, welcomed the test.

“I tested positive for HIV on August 4th, 2011. Finding out early if you have HIV is key to living a normal life. I wish I had had access to an easy-to-use home sampling kit. It would have saved a lot of worrying and meant an early diagnosis and less risk. I’d encourage everyone to get tested as early as possible.”

More information on HIV and HIV testing can be found at Free postal HIV testing kits can be ordered online at www.HIVTestUK.com.

For more information about HIVTestUK, contact Dan Hartland at dan.savinglives@gmail.com.