Hit enter to search or ESC to close
NewsPositive People

Positive Ambassador Tom in the Airwaves 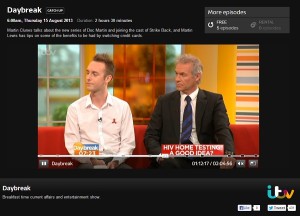 Our Positive Ambassador, Tom, who blogs as ukpositivelad, has been taking to the airwaves today, discussing HIV, home testing and stigma. Here are his thoughts, taken from his latest post:

I ended up being booked onto a train only a couple of hours later, a car met me at Euston and took me to my hotel where a camera crew turned up to shoot promos, they left about midnight and I set my alarm for 05:00am. My alarm went off, I got up made myself presentable and a car took me to the studio. After several coffee’s I got plonked on the Daybreak sofa with Dr Hilary Jones and we were interviewed by Matt Barbet and Kate Garraway.

The car picked me up again and dropped me off at London Euston. Just as I was about to board my train I got a call from SavingLivesUK who wanted me to talk on their behalf on BBC Radio 5 Live’s morning show. So they sent another car for me, whisked me off to BBC Broadcasting House and I was interviewed alongside Sir Nick Partridge of the Terrence Higgins Trust by Phil Williams. It was a much more in-depth piece on HIV, focusing on stigma and the lifting of the ban on HIV+ healthcare professionals.

You can read the rest of his post here.