Let’s start at the beginning. I grew up in rural Worcestershire, the – finishing school in 2002. Now, sex education back in Worcestershire had been patchy (and that’s being polite) – I left school knowing very little about the world of sex, basically all I knew was that sex was for procreation and that giving birth was like a horrific scene from the movie Aliens.

In 2003 I met a guy online and moved down to London to be with him. Things were rosy, couldn’t be better, but after a nearly eight years things slowly fell apart and we decided to go our own ways. Thankfully we remain good friends still.

Very quickly after that I entered a relationship  I wasn’t ready for – a “rebound” if you will. In my previous relationship we’d not used condoms but that was something we were both happy with within our monogamous relationship, but this new guy didn’t want to use them either. I wasn’t sure about this – I barely knew him, but in my rebound state I was eager to please him and I lacked the necessary confidence to negotiate safer sex. A few months down the line I found out that he’d been unfaithful to me and I broke off the relationship.

My friends encouraged me to go for a full sexual MOT at the sexual health clinic, luckily everything was clear – or so I thought.

The next day I flew to Gran Canaria for a two week holiday with my friends. On day two of the holiday I was sitting by the pool when my phone kept ringing, I ignored it as I didn’t recognise the number and I was on holiday. It kept ringing. Eventually I answered the phone and a woman told me I needed to come into the clinic ASAP. When I told her I was only two days into a fourteen day holiday she panicked, told me not to have sex with anyone, and come to clinic as soon as I got back to the UK. Holiday ruined.

By the time I go to the clinic I’d had a whole week to rationalise my panic from “I’m going to die of AIDS” through to “it’s probably just chlamydia”. I remember sitting in the waiting room like it was yesterday, getting called through for the first appointment of the day. The nurses sat me down with a cup of water and told me straight up “I’m sorry to tell you, but your HIV test has come back as positive”. My brain didn’t know how to react, so it didn’t do anything at all – I sat there like a stunned mullet. Eventually I told the nurses that I was fine, I took their leaflets and left with a follow-up appointment booked for the next week.

I got half way home before I broke down. Stood in the middle of a plaza it hit me like a tonne of bricks – I’m HIV-Positive… #@$#! I called my friend Paul, the only other person I knew that was HIV-Positive, he came and picked me up and we went back to his for a chat and a few beers. He talked me through some of the more complicated leaflets and told me some of the stuff I could expect to happen next.

Shortly after I decided that I wanted to use my misfortune to help others. That’s when I started tweeting as @PositiveLad and blogging under the anonymous pseudonym ‘Sam’, I wanted to paint a realistic portrayal of a young gay man dealing with his HIV diagnosis and life with HIV. Eventually I got my health under control, my viral load is now ‘undetectable’ and my CD4 count is higher than it ever has been.

Fast forward eight years and I’m happy, healthy, still undetectable and engaged to the most wonderful guy. Things have a way of working out. 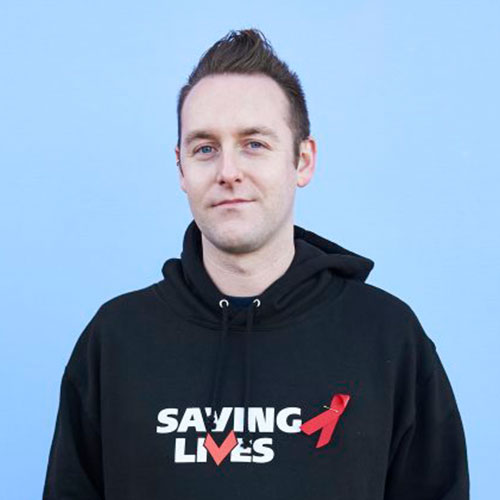 My story on video