Hit enter to search or ESC to close
NewsSport

Kal Yafai, the former Team GB Olympic boxer and 2012 Young Boxer of the Year, has signed up as a sporting ambassador for the HIV awareness-raising charity, Saving Lives.

The charity is announcing Yafai’s appointment ahead of an important fight for the Birmingham-born boxer on Saturday, 23rd November, the first Saturday of National HIV Testing Week. 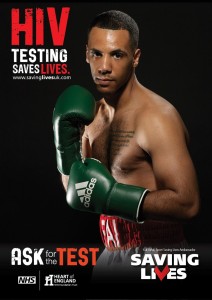 One in five of those living with HIV in the UK do not know they are infected. This means they cannot access today’s life-saving treatment, and may unknowingly be passing on their infection to others.

Saving Lives aims to promote expanded and early HIV testing in order to improve the health outcomes of those living with HIV – and stop the spread of the infection. Late diagnosis is associated with increased mortality and poorer health outcomes.

“The people dying of HIV in the UK today are those who are not diagnosed,” says Dr Steve Taylor, a Birmingham-based HIV expert and Medical Director of Saving Lives. “Treatment for HIV has been transformed over the last ten years, and those who get access to it early can live a full, long life.”

Yafai is appearing in promotional videos and educational booklets for the charity. The aim is to speak to new audiences in a fresh way, and reduce the stigma which still surrounds the condition and dissuades people from taking the test.

“If you get tested, there’s treatment out there which will save your life,” says Yafai. “That means you can live a healthy life, saving yourself and saving others.”