Is HIV Testing the Best Prevention? 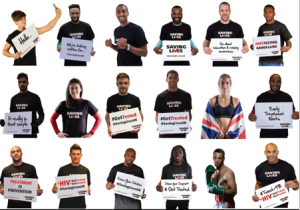 Let me answer the question I pose in the title of this post straight away: I think the answer is a most resounding yes. But more of that later ….

“I usually get a lot of retweets, favourites and mentions whenever I put something out on Twitter,” said England under-21s captain and Stoke goalkeeper Jack Butland to me this week. “But whenever I tweet about this, the relative silence is really noticeable.”

Those unresponded-to tweets of Captain Jack’s (cue tip of the hat to Doctor Who) were, of course, about HIV. This past week has been National HIV Testing Week, and Saving Lives has been supporting sexual health services across the country to promote HIV testing and try to drive down the figure which always surprises people when they first hear it: that a quarter of the 110,000 people living with HIV in the UK do not know they have it.

Someone living with undiagnosed HIV will get sicker than they need to be; they have a much lower chance of living a long life; and they may well unknowingly pass on the infection to their partners. That is, the spread of HIV is being enabled by ignorance.

Four years ago to this day, we launched a campaign and a charity with the tag line “HIV TESTING SAVES LIVES”. But unlike other campaigns I had worked on, something was different about this one: it appeared to be more acceptable to the general public.

Why did that campaign work for us when so many others failed to make an impact? I believe the reason was simple: it saw past sex and through to sexual health. It avoided the moralising and judgemental reactions we received every time we dared to mention the S word.

Frustrated by knocking our heads against brick walls year after year we finally appeared to be onto something. Something tangible, a call to action (“Get Tested”) and a promise that, if you responded, you could achieve something (“Save Lives”). A test can extend your own life, and, if you can to get somebody else to take the test, maybe you can save their life, too.

Maybe that’s why at last we have been getting some traction with the wider public. It’s a very fine line, though, and one which we are still feeling our way along.

Are we starting to see the tide of HIV acceptance change? Maybe. But then again – think back to Jack – maybe not.

That’s why the awareness-raising we and many others have been doing this week is truly crucial in the fight against HIV: because the stigma that surrounds the infection, and that at least one of our celebrity ambassadors has noticed on social media in this last week, drives a reluctance to test which actively promotes the continued spread of HIV.

Figures released in the last few weeks by Public Health England underscore the fact that HIV continues to grow in the UK, and that in many ways it continues to do so silently.

There are a range of prevention strategies that have been proposed, ranging from abstinence (a great favourite of George W Bush) to more widespread condom use (very effective although not consistently employed); from treatment of STIs to circumcision and more recently Pre Exposure Prophylaxis (PrEP). All of these work to a greater or lesser extent, and all have their place. We must have a broad and varied approach to HIV prevention.

However, for me two recent studies are real game-changers for HIV prevention efforts and Treatment As Prevention (or TASP). The snappily-named US study, HPTN 052, established in 2011 that the efficacy of antiretroviral therapy at reducing HIV transmission from the HIV-positive partner to the HIV-negative one was at least 96% in heterosexual couples, but had too few gay couples in it to establish if the same applied to them a higher figure than all of the prevention strategies listed above.

The second study, which has only reported interim data earlier this year, was perhaps even more exciting. The Partner study enrolled couples in discordant relationships (that is, one in which one partner is positive whilst the other is negative), and recorded the numbers of sexual acts, the types of sex, the rate of condom use or otherwise, that occurred over the period of a year.

Well, thus far there have been none. That’s correct: zero. This is not the same as saying transmission cannot occur from a person on treatment. and these are interim data. Nevertheless, these results do go some way to explaining why the majority of new infections in this country are from people who are 1) not on treatment; and 2) unaware of their infection.

So treatment as prevention will almost certainly work. But here’s the rub: it is impossible not to return to that twenty-five per cent figure, that one person in every four living with HIV who simply are not aware that they are already infected. In some communities, the rate of undiagnosed HIV is even higher.

Rates of undiagnosed infection were somewhat lower among heterosexual people of other ethnicities: 27% in men and 23% in women.

Ultimately, treatment will not help the partner of someone with undiagnosed HIV.

It is important, then, that all of us interested in arresting the spread of this virus focus squarely on driving down the number of people who do not know they are infected. How, though, to reach those people who should be taking the test and yet, for whatever reason, are not?

There are many charities and NHS services doing just that, and they do so within different communities and in different ways. But what many of these approaches have in common is the breaking down of barriers, the reduction of stigma and the promotion of an idea that HIV is nothing to be ashamed about.

Entrenched opinions, often backed up by deeply-held cultural assumptions, are not easy to change. It is, however, essential that we challenge them. In one way, this is simple: there are clear messages that correct many of the myths that surround HIV testing.

Anyone can contract HIV. Anyone who has had unprotected sex is at risk.

The test is not painful, and it is not difficult to access: go to your hospital, or a GP, or a confidential sexual health clinic and simply ask for the test.

Just taking the test in no way affects your chances of getting life insurance of a mortgage. (Like any chronic condition, actually having HIV can have an effect – but there are specialist providers who can help.)

HIV has no moral dimension. It is a virus, and it knows no boundaries of class or caste, gender or sexuality. My patients come from all walks of life, and none are defined by their condition.

These messages have the benefit of real clarity. They can be, however, difficult to get heard, as our ambassador found this week. People switch off, assume the message is not for them, or simply do not want to know. But that is precisely where talking about HIV in new ways, via new people, and in new contexts, can help.

Saving Lives has been running a ‘Selfies Saving Lives‘ campaign for National HIV Testing Week, which sees Premiership footballers, famous medics, Olympic medallists, positive people, and members of the public all join forces to take a photograph of themselves holding a card bearing a simple sentence: HIV testing saves lives.

By associating HIV with positive community-building online, with open dialogue and friendly language, and with, yes, the healthy bodies of famous sportspeople, we are attempting to break down the prejudice that unfairly surrounds the virus and those that live with it.

When we place our ambassadors on the sides of buses, half of all those who then attend clinic as a result of our posters report no other exposure to sexual health messaging of any kind. This is absolutely key: reaching new people, getting fresh individuals through the door to take that test.

Only in that way can we diagnose the cases of HIV which are currently going undiagnosed. Only in this way can we prevent the further spread of this still life-threatening virus. And only in this way we can diagnose HIV earlier, and prescribe today’s life-saving medicine when it needs to be taken.

We hope, then, to ensure that next year our ambassador gets a few more retweets for his awareness-raising. Because, put very simply, HIV testing is HIV prevention – and saves lives.