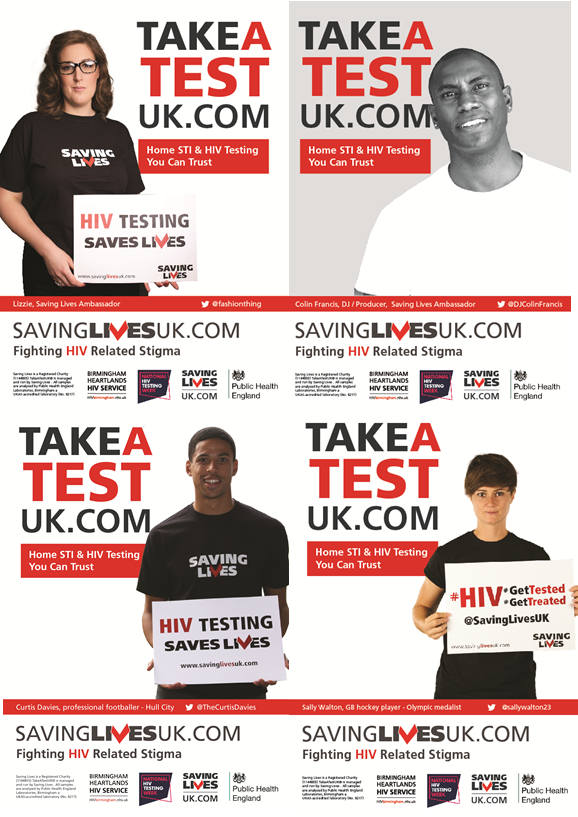 A leading HIV awareness charity is promoting HIV testing, and combating stigma, during this year’s National HIV Testing Week – by employing the power of new technologies.

Saving Lives is a national charity with the aim of reducing the amount of undiagnosed HIV in the UK. Through its network of celebrity ambassadors, and advocates living with HIV, it is promoting on social media free home HIV tests via TakeATestUK.com for anyone in the country who wants to know their HIV status.

The offer is valid from the start of National HIV Testing Week, 19th November, until World Aids Day, 1st December. Social media will be a key focus for the charity and its ambassadors in promoting the offer.

“One in five of those living with HIV in the UK do not know their status,” says Dr Steve Taylor, HIV Specialist at Birmingham Heartlands Hospital and Saving Lives’ Medical Director. “That means they cannot access today’s life-saving treatments, that can provide people with the virus with a long and full life. Testing is the only way to know your status”.

“Getting more people testing is a public health imperative. That’s why the charity will be offering free home HIV testing kits to anyone who wants one via its newly launched postal testing service, TakeATestUK.com, throughout National HIV Testing Week.”

The stigma that still surrounds HIV can dissuade people from attending a sexual health clinic or their GP to take a test. Saving Lives seeks to fight these misconceptions by communicating about HIV in more accessible ways. The work of the charity and its ambassadors has been featured on the BBC, on community radio stations, and in newspapers as diverse as The Guardian and The Sun.

Premiership footballer Curtis Davis is a patron of Saving Lives and an ambassador for the charity. “There are lots of myths about HIV,” he says. “That means people can be nervous about getting a test.

“The great thing about home testing through Saving Lives is that it’s the same quality as going to a clinic – but many people will feel a lot more comfortable in their own home.”

Lizzie is a woman living with HIV and a positive ambassador for the charity. “Stigma is a killer,” she says. “It stops people testing, and late diagnosis is associated with much poorer health outcomes. Free home testing is a great way to get people who wouldn’t normally test to do so.”

The charity’s network of celebrity ambassadors includes Sally Walton, a London 2012 Olympic medallist, and the DJ Colin Francis. “Both of us support the charity because it seems so obvious that we should all think about our sexual health – and get tested to stay safe,” says Sally.

“Promoting HIV testing is about promoting self-respect,” agrees Colin Francis. “We’ll be supporting the charity online and offline because every extra test really does make all of us that little bit healthier.”