As one of only a very few young people born with HIV in Wales, Mercy Ngulube says she felt isolated and unable to talk about it when she learned she had the virus as a teenager.

Worried about stigma and public ignorance Mercy, now 20, campaigned anonymously with the Children’s HIV Association for two years until winning a Diana Award in spring 2017.

At that point, aged 18, she had moved away from home in Cardiff to university and felt confident enough to go public in a bid to “normalise” the virus that still carries so much stigma.

A year on, Mercy is a fluent, gutsy speaker and campaigner who has spoken about HIV and her experience at international conferences and events across the world, given TEDex talks, taken to twitter to counter ignorance and misinformation, and served as chair of the Children’s HIV Association youth committee.

She goes into schools to speak about HIV for the Children’s HIV Association, has interviewed Prince Harry,Charlize Theron and Eurovision winner Conchita, to raise awareness about the virus, and in July this year addressed the International Aids Conference in Amsterdam.

In between all this the former Cardiff schoolgirl is studying for a degree in English Literature at Leicester University.

Meeting Mercy in Cardiff the day before she returns for her third year at university it is hard to imagine her as someone who found it hard to talk about HIV only a few years ago.

What has happened in the last four years would have seemed unimaginable to the teenager coming to terms with a new diagnosis about a virus she did not know much about.

“I was told I had HIV by my doctor and my parents,” Mercy recalls.

“When you are told, it’s like this is something you can’t talk about. I had to learn to live a double life but in adolescence all you want is to fit in and be part of society.

“It’s hard to do that when you’re trying to manoeuvre a huge secret and I did not have the language or skills to do that.”

Describing being told she had HIV as “a steep learning curve” she says the guidelines now are to tell children born with HIV when they are around eight years old.

“When I was a bit younger there were only about 20 young people born with HIV growing up in Wales so it was really isolating. Only recently has there been funding for projects for kids in Wales born with HIV.

“Growing up for me there were no support networks. The first other young person with HIV I met when I was 16 in London when I went on a residential with the Children’s HIV Association and they began to run a schools campaign.

“I think schools and teachers don’t know enough about it.

“The general message from society in terms of speaking about HIV is that it’s not spoken about so I did not think I could speak about it in the way I do now.”

Mercy also felt protective about her family: “By speaking about it I would not just be going to expose myself but my whole family. When you say it you can’t take it back.”

It took a prince and an award to convince her of what she knew inside, that she had the voice to campaign publicly.

Meeting Prince Harry in Durban, South Africa, at the International Aids Conference in 2016, Mercy was invited with other members of the Children’s HIV Association to a discussion at Kensington Palace and a year later accepted a Diana Award from him.

Prince Harry had recently had an HIV test on Facebook Live and had spoken publicly about how voices were needed to normalise the virus.

The Welsh teenager was struck by his words. Since being told she had HIV Mercy had told some close friends but had not gone public on her diagnosis. Now she decided the time was right to talk about her experiences and the virus.

“I had just started university at the time but had not come out publicly (as HIV positive). Prince Harry said it would be great if someone would come and normalise HIV at that award in 2017 so when I got the award I came out. The award is what prompted me to come out.

“ Princess Diana made huge strides in alleviating stigma around HIV and her boys are carrying that on.

“I am very aware I am only one of very few kids in the UK living with HIV and when I have a voice they have a voice.

“It was weight off my shoulders talking about it. I have never known anything different in my life. This is my life and I’m used to it. I think I have always been quite opinionated, so I had the personality to do this.”

Having made the decision to speak, Mercy hit the ground running talking about HIV at home and abroad, travelling to countries as far as Botswana and Lesotho to campaign.

She now wants to focus on ensuring people get healthcare and medication and fears many people, especially young people, don’t know enough about HIV, the risks and the treatment.

“We have come far since then in terms of science but it’s still about getting young people engaged in healthcare and going for sexual health tests,

“ We don’t generally have people dying from Aids now in this country. A lot of people are living with HIV on medication so there is a bit of complacency.

“What is really important to me is to get people on treatment. That’s what my future campaigning is going to be about. A range of things mean some people are not getting treatment.

“The UN has targets to get people on treatment – only 67% of people across the world with HIV are on treatment. So much of the problem is about people not being able to access treatment.”

Stigma and ignorance continue to be issues that affect getting tested and having treatment, as well as cost, Mercy believes.

“One of the main things to say is the stigma of HIV means people can forget they are talking about a human being. My advice to other young people with HIV is don’t let people take away your humanity.

“There is not so much stigma now but there is still stigma. One thing I have spoken about with the Duke of Sussex is normalising HIV. HIV is a virus attacking the immune system, but it’s the stuff associated with it that makes it hard – sex, drugs and being gay.

“If I told people I had an auto immune disorder no one would be on edge but if I said I had HIV everyone would be …’Oh… goodness’.”

“For me there’s nothing I can do about that but I have got to a point where I am confident with myself and, in the nicest possible way, it’s not my job to tell people to see my humanity.”

Mercy, who takes daily medication, says she can expect to lead a normal life and intends to do just that.

Like most third year undergraduates she is beginning to think about jobs and possible careers but isn’t sure yet what she wants to do.

She says she will carry on her HIV campaigning but that may have to take a temporary back seat while she concentrates on her third year final exams.

“A lot of people have asked me where I would be without HIV. I don’t think I would have had the life experiences I have and travelled the world,” she says.

All these experiences should make her CV stand out whatever Mercy decides to do. 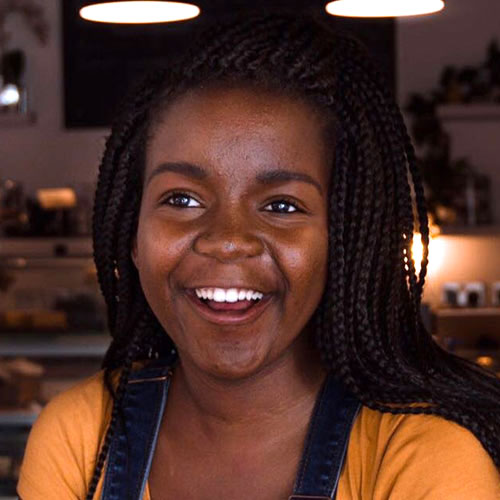