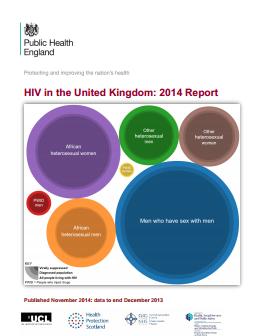 Public Health England has today published its annual report into HIV in the UK. It is available in PDF format here.

These figures cover 2013. We will be breaking down the results for you in the coming days and weeks, but the headline facts are fairly straightforward: HIV infections are continuing to rise, and increased HIV testing is still absolutely crucial. The good news is that late diagnoses continue to decrease – from 57% in 2004 to 42% in 2013. Following a figure of one in five of those with HIV being unaware of their infection in the 2013 report, however, we have returned with these new statistics to a quarter of people living with HIV without knowing.

Amongst particular groups, there are even starker messages. There was an all-time annual high of new HIV diagnoses amongst gay and bisexual men in 2013, and one third of African heterosexual men living with HIV do not know they are infected.

Dr Valerie Delpech, a Saving Lives ambassador and the head of Public Health England’s national HIV surveillance, said: “People diagnosed promptly with HIV infection can expect to live long and healthy lives. However, in 2013 people diagnosed with HIV late were 10 times more likely to die in the first year of diagnosis compared to those diagnosed promptly. People who remain unaware of their infection are also at risk of transmitting HIV to others.

“Knowing one’s HIV status is the key to both effective treatment, and to preventing onward transmission. This is why we are promoting the National HIV Testing Week. The campaign encourages people who are most affected by HIV to take an HIV test.”