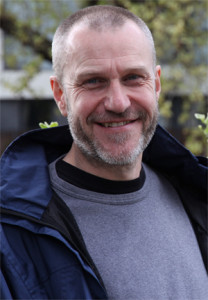 I’m 47.  I’ve been having sex since the age of 13 and have always been a safe sex advocate.  In the summer of 2011 I was struggling with life.  Work had gone horribly wrong and I was low and depressed.  Nothing really mattered – the future looked bleak and I longed to sleep and never wake up.  My health didn’t matter and I made short-sighted decisions.  At the end of July I was unusually ill and then, at 3.15 on August the 11th, I was told I was HIV positive.   I had tested HIV negative four weeks before.

My life had changed.

Within 30 minutes of being diagnosed I was alone and walking home.  I was confused but knew I had a decision to make.  My usual way of dealing with problems is to ignore them; to turn my back on them; to stick my head in the sand; to cough and look the other way.  But I took the decision to face it and deal with it out in the open.

I was lucky.  I had been diagnosed within a few weeks of infection.  This meant I had the chance to treat it from the beginning – I could work out how I should deal with the virus; rather than reacting to what the virus tried to do to me.  I could be in control.

I was lucky.  I was told by my (excellent) consultant (at my brilliant HIV clinic) that, at my age, it was recommended to go on medication sooner rather than later.  It was also said that early bombardment of the virus by anti HIV drugs will have huge long term benefits.  I’ve been told that I won’t die of an HIV related condition.  I was undetectable within weeks and my CD4 count is higher than average (higher than average for the whole population – not just those who are HIV positive.)

I’m lucky.  I have great friends, a loving and understanding family and I work in the media industry – one of the most diverse and accepting environments. I can be open about my status. But I’m not a campaigner.  I’m not political.  I don’t wear a Body Positive tee-shirt or go on marches or fight for rights.  However, I’ve realised that I’m in a position that enables me to help break down the stigma and ignorance that still surrounds the virus.

The fact that I’m HIV positive is just that – a fact.  As is my height, or my eye colour, or my support for Fulham Football Club.  HIV is a part of me, but just one part of a complex whole.  I’ve chosen to discuss my status and my experience in a book, on stage and as part of Stand Tall, Get Snapped – the touring portrait exhibition that is marking 30 years since the death of Terrence Higgins.  I’m not ashamed of being HIV positive.  I’ve done nothing wrong.

I’m well and live a full life; I’m lucky.  But HIV is still a serious, life changing condition.  Medication is excellent – but it can have significant and horrible side effects.  Not everyone can take the toxic cocktail.  The damage to your immune system can create issues with other viruses and conditions.  Stigma is still rampant.  It is possible to live with HIV – but it isn’t easy.  The fantastic advances in medication and care shouldn’t be seen as a reason to not worry about HIV.  It is still an extremely serious condition, with far reaching consequences.

My advice would always be to test – know your status.  If you know whether you are positive or not you can take the right decisions for you – earlier rather than later.  You can be in control.

Testing is quick and simple.  It needs to be more easily available.  With 25% of those infected unaware of their status, it’s important to increase testing to help prevent the spread of the virus.  By making the test a more routine part of any medical diagnosis, the spread can be curtailed.

Early diagnosis has been the key for me.  It should mean I will lead a full and hopefully long life.  A positive diagnosis didn’t end my life – it just changed it.