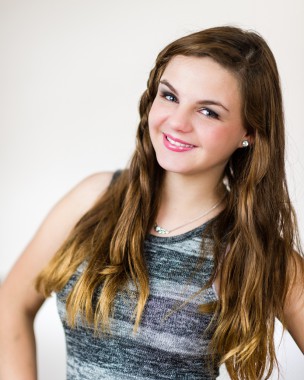 Ashley Murphy is a seventeen year old, internationally known motivational speaker. She was born in Toronto Canada to a mother who had drug and alcohol addictions. Those substances had an effect on her but not as much as the HIV she contracted from her birth mom. Ashley was in respiratory distress with full blown AIDS and PC pneumonia by the time she was only a couple months old. At six weeks of age, she weighed three pounds ten ounces. She spent the next few months in Sick Kids hospital in Toronto where she was on life support in a medically induced coma.

When she was six months old she was placed with a foster family for palliative care. They were told she would live a few weeks at most.

She has had some set backs over the years. A feeding tube was inserted at the age of five because she only weighed 23 pounds. A couple more surgeries and then at age nine the feeding tube was removed.

Her viral load has been undetectable for a few years now and her CD4 count has come up to the low 500’s.

She is in grade eleven and has made the honour roll. She is a talented singer and plays the guitar. She has lived openly with HIV since she was seven years old in spite of her parents and her medical team advising her not to tell. At ten she started public speaking and at 12 made a documentary about growing up with HIV. In school she has been the student council vice president, in the Eco Club, Drama Club, Think Pink Club and Legion of Mary. In her community, she has been awarded the International Rotary Club’s Paul Harris Fellowship and the Inspire Awards Dr Charles Roy Award for HIV/AIDS Activism, she was awarded the Ajax Civic Award for Youth. She has spoken across North America in stadiums with tens of thousands of youth. Travelled to Africa and Europe sharing her story of perseverance and courage. Earlier this month gave her first TED Talk. And will carry the torch this summer for the PanAm Games.

She has been an active volunteer along with her nine siblings since she was three. The Toronto AIDSWalk being her first fundraising ‘gig’ at three. Since then she has volunteered for dozens of charities and has done public speaking in television, magazines, newspapers, charity galas etc. This was all as a volunteer. She is the second youngest child in a family of ten children – eight of whom have special needs.