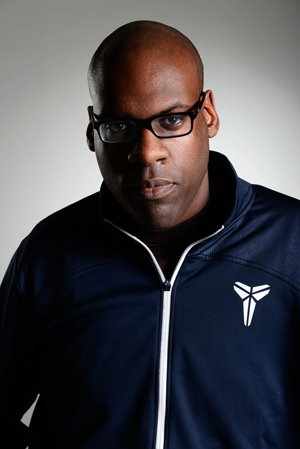 Jeremy has had a musical background since the moment he was born . His first encounters were through his fathera, a member of a successful disco band J.A.L.N band in the early eighties.

In addition to the early influences of his father, artists mainly of American origin such as Chic, Chaka Khan, Diana Ross, Delegation, Kool and the Gang etc were also an inspiration to Jeremy.

The not-so-obvious stage in Jeremys musical career was to become a DJ. His reasons were, however, so that he could once again approach the music at a street level, where he would get a direct reaction from the crowds he was playing to. He involved himself with local pirate radio stations, playing deep NY house music, which led towards a successful path playing at many clubs around the world.

Still unable to satisfy his eagerness to further his career in music, Jeremy contacted Nice n Ripe records and started to produce tracks on their label under various names: SLY, DEEP COVER, GROOVE CONNECTION, G.O.D, SYLVESTER amongst others.

Jeremy moved to London and settled in quickly, going to all the major House and Garage clubs so that he could get a vibe from the crowds. The pirate scene in London is much larger than the rest of England and plays mainly House and Garage – so Jeremy listened carefully to what the DJs were playing and produced music to that sound. At Nice n Ripe, Jeremy formed production/remix outfit CLUB ASYLUM, now enjoying success for remixing some major recording artists which include: ALL SAINTS, JODECI, KC& JOJO, THE DON, SHOLA AMA, DIONNE RAKEEM, ANOTHER LEVEL, RAY RUFFIN, KENNY THOMAS, DENADA, LYNSEY MOORE, RASHEEN PATERSON, GINUWINE, AMIRA, BARBARA TUCKER, LUTRICIA MCNEAL, MAIDA MYLES, MARVIN AND TAMERA AND DAWN TALLMEN amongst others, yet still keeping an underground edge to his sound.

Jeremy was signed to but still producing records for Azuli records, the most influential independent dance label in Europe, enjoying success under the name ELECTRONICA with recent club hit ’Coke, Sex and Drugs’ reaching number 14 in the Cool Cuts chart – and ‘Strangled’, another track just recently signed to Telstar’s dance label, Multiply records,  a remake of The Stranglers hit record ‘Peaches’, which has already been tipped to hit the British charts this summer. An Electronica album is to follow. Jeremy also continues to work with Class A, who are responsible for remixing many artists which include EDDIIE GRANT, GAMBAFREAKS, DJ DISCIPLE, 10CC, BRITTALICS, and GOODFELLAS amongst many others, as well as producing under his own name.

Jeremy was also signed as PURE ORANGE for ROGER SANCHEZ’s new label STEALTH Records in conjunction with DEFECTED RECORDS. The track has already gained number one position in the Cool Cuts chart, and number two position in the BUZZ CHARTS twice in the space of 2 months. Remixs by FATBOY SLIM, SCUMFROG, PARTY ONE, and ROGER SANCHEZ. .

Jeremy has also worked very closely with singer-songwriter VICTORIA HORN, responsible for writing the massive single Days gone by by DEATH IN VEGAS and RUI DE SILVA as well as writing for Kylie Minogue and Danni Minogue. They both formed the group ‘Feela’, and released records with Azuli Records amongst others.

Currently Jeremy runs two record labels Love House Records and Urban Dubz Music. The labels were set up a few years ago to showcase Jeremy’s releases under his various aliases. The label has also signed various artists and can be heard all over the world.