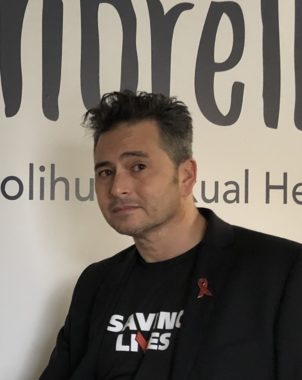 Dr Steve Taylor was a junior doctor in the early 1990s – a time when the Infectious Diseases wards at East Birmingham Hospital (now Birmingham Heartlands Hospital) were full of young men and women dying of AIDS-related illness and cancers.

At that time, treatment options were both toxic and very limited. Unfortunately, during these years Steve saw a great number of young patients die without access to the life-saving treatment that we now have available. It was these experience which made him decide to specialise in HIV Medicine.

As a young registrar, he was involved with the early clinical trials of combination HIV therapies which contributed to the development of Highly Active Antiretroviral Therapy (HARRT).

From 1999 to 2002 he won a three-year NHS Research & Development ‘Sheldon Fellowship’ and became a Clinical Research Fellow within the Division of Immunity and Infection at the University of Birmingham. He obtained his PhD thesis in December 2002, entitled ‘The Sexual Transmission of HIV’.

He returned to Heartlands Hospital in 2003 to take up a consultant position in Sexual Health and HIV Medicine and became the lead for the HIV service in 2004. Over the next sixteen years, the Heartlands HIV service expanded, developed, and became widely recognised as one of the most innovative and patient-focused multidisciplinary HIV treatment services in the UK.

Steve recalls 2006-2007 being the real landmark years, when new, effective drugs – based on the HARRT work from years earlier – at last transformed the treatment of patients dying with HIV/AIDS.

Throughout his time as a clinician at Heartlands, Steve has always been a very strong believer in the importance of doctors and staff being involved in the city’s World AIDS Day events – both to remember those lost, but also to celebrate those who are living well with HIV and to educate the public on how HIV has changed. It was in 2008 that he first met Gary Jones when they worked together on the Positively Red World AIDS Event

In 2011, together with writer and healthcare communications consultant Dan Hartland, Steve set up the Saving Lives Charity, a project largely born out of frustration in the lack of general education and awareness about HIV – among both healthcare professionals and the general public. The charity focused its activities initially in Birmingham, and latterly more widely across the UK.

Saving Lives had always had a strong presence at Birmingham’s World AIDS Day events and stepped up their involvement after the WAD funding in Birmingham was stopped in 2015.

Being a partner with the BAHM project was simply a natural evolution and “complete no-brainer” to Steve, Dan and the whole Saving Lives team.

“We are so proud that we have been involved in bringing this magnificent memorial to Birmingham and hope it will become a national memorial to all those who have died of HIV and AIDS in Birmingham and all over the UK – as well a symbol of positivity and hope for those living with HIV. We want it to be a talking point, both to educate and address the stigma and prejudice that continues to prevent people testing for HIV. After all, HIV testing Saves Lives.”